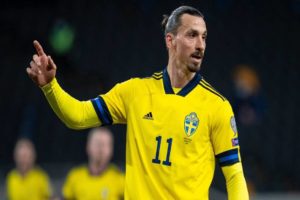 Milan, 10th May 2022, Global football star Zlatan Ibrahimovic is about to drop his second NFT collection. The Laws of Adrenaline will drop on MakersPlace, May 12, 2022, at 6 PM CET. Appointment not to be missed.

A triptych of artists and their works is set to illuminate the international marketplace specializing in NFT, which accepts both traditional payments (credit cards) and cryptocurrencies.  Davide Petraroli with his superb digital painting “Project Zeus-Zlatan” condenses all the sensitivity and determination of the Swedish phenomenon into a refined compendium of virtual brushstrokes; the singer High Snob aka Esklator, fresh from his success at the last Sanremo, with an intense chromatic score called together in the work “Nel pallone”, a crucible of restlessness and digitised desire; the virtuoso, and by now master of the NFT field, Giovanni Motta: “An Untold Story: Go Ramingo” is the video parable of a little Zlatan who delves into the meanders of memory to discover the mystery of life.

The artists through their different styles and backgrounds have created heterogeneous and varied artworks, representing the different facets of the human dimension of an indomitable and mocking champion.

By writing his “Untold Stories” Zlatan Ibrahimović wants to share his life experience. Zlatan is also a passionate art collector and by joining this project he plays an active role in the creation of the first NFT collection taken from a book, thus adding a prestigious artistic touch to better depict his walk of life. Zlatan’s personal story speaks about love, happiness and the future and is, therefore, a story that speaks to everyone and belongs to everyone.

Any collector who buys at least one open edition in each of the three Zlatan Ibrahimović NFT drops will receive a gift.

The project, created in collaboration with “Corriere della Sera”, ArtsLife, Wrong Theory, ArtN and G-Lor, is part of the project launched by “Corriere” last September in the world of digital art.

Craig Palmer, CEO of MakersPlace, said the following about the NFT drop:

“We are excited to continue our partnership with one of the world’s premiere athletes, and now successful art patron, Zlatan Ibrahimović. March’s drop was not only a sellout, but GionnyScandal’s sale received a winning bid of 20ETH. Ibra’s fans can enjoy new artwork from Giovanni Motta, Escalator and Davide Petraroli”.

At 40 years of age, Zlatan is still playing football at the highest level. He currently stars as a striker for one of the best clubs in Italy, AC Milan. He has also played for such historic football clubs as Juventus, Barcelona, Paris Saint-Germain, and Manchester United.

Besides this, Ibrahimović has scored over 570 career goals. As a result, he’s widely considered to be one of the greatest strikers of all time.

MakersPlace is the premier NFT marketplace for digital art. Launched in 2018, MakersPlace utilizes blockchain technology to facilitate the sale of authentic, original digital artwork, ensuring rarity and ownership for both creators and collectors.

MakersPlace has emphasized accessibility since its inception and has attracted a large mainstream audience as the first NFT marketplace to accept both cryptocurrency (ETH) and non-cryptocurrency (USD) payments, which it facilitates through crypto wallet and credit card transactions, respectively.

MakersPlace helped catapult digital art and NFTs onto the global stage, with the historic sale of Beeple’s Everydays: The First 5000 Days for $69.3 million in partnership with Christie’s auction house in March 2021 – the record price for any digital artwork. Our mission is simple: to enable a vibrant future for digital creativity. Please visit the official website.

ArtsLife is a newspaper about culture, market, art critique and art history, and is an essential daily reference point for the world of auctions, fairs and galleries. Thanks to a team of fifteen editors, assisted by more than a hundred collaborators spread around the globe, ArtsLife informs and reviews all that concerns cultural and artistic events, in Italy and in the wider world.

Initially born as a working tool for the students of the course of “Art Publishing” at the Academy of Fine Arts of Brera in Milan – coordinated for a few years by the Director and Founder, Paolo Manazza – in 2008 the ArtsLife online platform was registered as a newspaper at the Court of Milan.

WrongTheory founded by Alessandro Brunello and born from the collaboration between artistic, curatorial and managerial expertise is the curatorial and productive reference for Crypto and Contemporary Art in the physical world and in the Metaverse.

By making sensibility and decentralized languages usable, WrongTheory creates meeting and contamination opportunities between new instances and trends in the universally recognized artistic and cultural landscape. WRONG THEORY as well as supporting innovative artists and projects, is the Real Life production of the NFT space and in 2021-2022 curated space and in 2021-2022 curated the first museum exhibition of Crypto Art “2121 Crypto Art is Now” at the Museo Della Permanente di Milano with over seventy of the most important NFT artists in the world.

Golden Arts, signed as ArtN, is the first Italian utility token dedicated to art that is proposed as a tool through which people can become members of an artistic promotion project and actively participate in the definition of a new cultural scenario.

ArtN was launched in November 2021 by ArtsLife.com, the well-known art and culture magazine founded and directed by Paolo Manazza and by Gianni Miller, pioneers of multimedia communication in Italy and of video streaming in the world, assisted by a technical team and by crypto finance experts.

In addition to representing an investment opportunity, ArtN offers a series of services that provide advantages to holders, as well as to a wider community of artists, places of art and culture and local realities on which it intends to intervene in developing specific projects of enhancement and promotion.

The post Global football star Zlatan Ibrahimovic is about to launch his second NFT collection appeared first on cryptodailynews24.com.