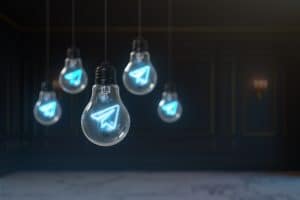 TON, the crypto that can be transferred via Telegram’s messaging app, is launching its NFTs on Disintar. The Open Network’s new ecosystem marketplace has surpassed $2 million in total sales volume in a single day.

TON ecosystem: from Telegram to NFTs on Disintar

# 822 from the NFT Ton Punk collection

Not even a week has passed since the news that users of Telegram, the messaging app, can now send and receive the Toncoin (TON) crypto instantly and at zero transaction cost by activating the chat’s built-in wallet.

And now the TON ecosystem has also launched a new service: the sale of NFTs based on The Open Network’s blockchain directly on Disintar’s new marketplace.

You can now buy and sale NFTs on https://t.co/vPRhxjjENX, one of the first NFT marketplaces in $TON ’s ecosystem!

A few days ago, https://t.co/vPRhxjjENX launched its collection. The total #NFT sales volume surpassed $2M in just one day.

“You can now buy and sale NFTs on http://Disintar.io, one of the first NFT marketplaces in TON ’s ecosystem! A few days ago, http://Disintar.io launched its collection. The total NFT sales volume surpassed $2M in just one day”.

On Disintar‘s new marketplace, it is possible to see the various NFTs and collections, such as that of TON PUNKS, whose NFT #1151 is offered for sale at a price of over 8 million TON, the equivalent of over $14 million at the time of writing, not comparable to the #3280 which is worth 479 TON, the equivalent of almost $890.

Looking at the chart of Toncoin (TON), its price has been peaking from April 25 to April 29, and then falling from April 30 to today.

From this it can be deduced that after the Telegram news, TON had a price pump that took it to its high of $2.33.

The news of NFTs on Disintar, however, has not brought any major price changes. At the moment, in fact, the market response is not exactly positive.

At the time of writing, TON is worth $1.85, and is the 207th crypto by market capitalization, with a total market cap of just over $2 billion.

Russia’s never-ending siege against the Ukrainian people led Telegram founder Pavel Durov to clarify his position on the messaging app last March, stating that Telegram would remain safe for Ukraine.

Durov’s stance was also the result of a not-so-happy history with his homeland, as he had to leave the company he had founded and Russia.

Since his departure, Durov says that everything has changed, that he does not live in Russia and that he has neither employees nor companies there. For him, users’ rights come first, no matter the nationality, like in the case of Ukrainians.