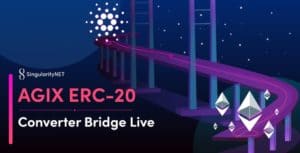 SingularityNET has announced the launch of a new bridge that allows owners of AGIX and NTX tokens to convert them from Ethereum to Cardano, and vice versa.

In the photo, the CEO and Founder of SingolarityNET

It’s called the ERC20 Converter Bridge and is designed to facilitate open collaboration and interoperability between the two blockchains.

When tokens are converted from one blockchain to another, the original tokens on the source blockchain are simply burned, and new tokens are minted in equal measure on the destination blockchain. So the total number of existing tokens does not change.

The interface to perform this operation has been designed to be intuitive to use, so users need only select the chains to perform the operation on, the type of token to be converted, and authorize their wallet via a web3 connection.

How to use the bridge?

For the conversion from Cardano to Ethereum there is an additional manual step to be done, because the user will have to deposit the tokens on a deposit address that is shown at the time of the conversion request.

Once the process is complete, the source tokens will leave the user’s wallet, while sending an equal number of new tokens into the destination wallet.

The conversion process takes about ten minutes, which may increase during times of high traffic on the blockchain.

In fact, the decision was made to wait for 15 block confirmations following the one in which the transaction is entered on both blockchains to consider the conversion valid. In case of problems, the conversion is considered expired, and in that case not executed.

Instructions for using the bridge

SingularityNET has also published the Converter GitBook with full instructions on how to use the converter.

“The importance of this port for SingularityNET and the whole blockchain and AI ecosystems cannot be overestimated. It will yield not only a far faster and more economical AI network but also a massively superior foundation for adding advanced new functions to SingularityNET and moving toward realising our vision of decentralised AGI”.

As second- and third-generation blockchains are not yet able to talk directly to each other, cross-chain bridges to date are the only way for token holders to be able to choose which chain to use.

It is therefore a real necessity, both for users and for the market, to be able to “move” tokens to different chains than the one on which they were originally issued, but it is important that these moves do not increase the overall number of existing tokens.

This is why the tokens to be converted are burned, since the only way to make them available on another chain is to create new ones on the destination chain.

The post SingularityNET, new bridge between Ethereum and Cardano appeared first on cryptodailynews24.com.