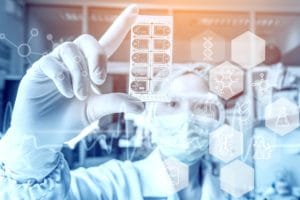 Inside the science metaverse

The metaverse, powered by the blockchain, could be the right push to give life to a new paradigm of science, the Decentralized Science (DeSci).

For many diseases, which have proven unprofitable for Big Pharma to cure, there are tragically no approved medicines. Many of the patients currently suffering such diseases rely on highly personalized medicine, oftentimes at the local level, to manage their disease.

What if a group of people with the same rare disease could band together, pool resources and crowdfund resources to cure said disease? It’s possible, but only if the right technology were to come along. That technology might be metaverse as underpinned by blockchain technology.

Decentralized science, upload your genome into the metaverse

Imagine, instead of being dependent on how profitable it is to treat your disease to be cured, you could map your own genome, which costs approximately $1,400 today. Once you map your genome, you can see what proteins your body produces.

In the future, you will then be able to enter into a Metaverse for decentralized science (DeSci) and, with your wallet connected, upload your genome. The community can then take a look and perhaps begin working on cures for your personal malady. You can send the bounty for such a cure from your wallet to an escrow account.

You can tell the public what’s going on, and then put up a bounty or crowdsource a bounty for the solution. With NFT technology, those who put up a bounty can own a fractionalized interest in that research and development. Anyone can put on their virtual reality goggles, enter into the Metaverse, and start using the platform to receive different rewards for scientific creations and contributions.

This will ultimately be required to take what Jeff Garzik, former core contributor to Bitcoin and founder of Bloq, a centralized and decentralized flight path. In short, a small number of players are likely to be the ones putting up bounties for diseases and taking fractionalized ownership share in. They will put out bounties to help crowdsource the development of more libraries and presents others could use.

How can it be used?

In the present day grant system, generous donors or corporate donors put a grant towards a specific research project. The IP produced as a result of such grants are rather convoluted. With a NFT or token based affiliate program, universities can acquire tokens or be given them after certain, simple actions and they can begin crowdsourcing their research. If a specific professor is an expert on a certain topic, but he’s missing a critical piece to a solution to a problem (a cure for a disease) he could put up a bounty using tokens. We see this as a fundamental democratization of the scientific process.

This creates a royalty-like structure for innovation. If you put up a bounty for curing a specific disease, you earn a percentage alongside whoever manufactures it. It creates a free market economy built by smart contracts. If enough people care about a cure, they can try to make it happen themselves.

The science metaverse ecosystem has IP hashed onto a blockchain in order to keep track of that data, trade data between users on a marketplace, put out bounties to collaborate, and manage rewards. If you hash IP rights, your wallet address will be tied to that specific IP. Many wallet addresses, with specific percentage allocations applied in the metadata, can lay claim to the various parts of a single cure.

On networks, if you pay everybody to do a submission, you will end up with a massive amount of spam on the network. The tokens in such a system help to prevent spam. The blockchain industry has already created a bunch of research on mitigating spam based on trust systems. The data in the science metaverse will be very valuable, in part thanks to such spam mitigation techniques.

The metaverse grand research goals will be pursued by a diverse group of scientists and citizen-scientists working together. How do we get to mars? How do we eradicate cancer? We also believe there’s enough interest from the public in wanting to solve these types of diseases. The Science Metaverse will create an infrastructure to create monetary incentives for the research and development Big Pharma doesn’t conduct. Ultimately, the holy grail is to ensure this is decentralized with as many incentivized participants as possible.

The post Inside the science metaverse appeared first on cryptodailynews24.com.