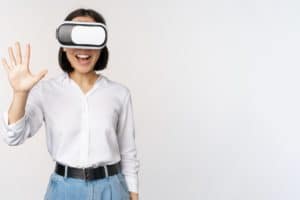 Meta is now a reality, but for its rise in the world of social networking it needs to be easily understood by the masses, and this is perhaps why the company has decided to open a physical shop.

California, in the headquarters of Zuckerberg’s company and to be precise in Malmo Park, will host the first shop of the metaverse that is physical. The shop will be aimed at selling hardware functional to the metaverse and at helping Facebook and non-Facebook users understand the new social dimension.

A series of physical Meta shops on the way?

There is a feeling that this will be just the first of a series of similar shops that will be scattered around the world in major cities and that will help people become familiar with the metaverse.

The store will feature giant flexible screens on all the walls where the user’s experience will be projected as they decide to try on the helmet, headphones and goggles to live the experience.

This first phase will help people to normalize their behaviour with the new technology, understand its dynamics and meaning, and will then leave room for phase two, which will be that of a massive diffusion with an appealing format of the social all over the world.

Towards the Metaverse, the story of how Facebook evolved

The social network is now so well known around the world that it seems boring or even obsolete.

Boring is not quite the right word, as billions of users around the world use it on a daily basis, but interactions show that fewer and fewer users are using it during the day.

The decrease in the number of interactions, combined with a slight but progressive loss of users, especially younger ones, to other social networks such as Instagram or Tik Tok, for example, set off the first alarm bells for Mr Zuckerberg.

In addition to these user problems, there is also the issue of revenue: the fewer people interacting, the less appeal the marketing is, and consequently the revenue is also reduced.

To make the platform more attractive to new generations, technological innovation combined with the skills of engineers, designers and modern developers can create metaverse and this is precisely the path chosen by the Californian genius.

In 2021, Zuckerberg announced the change of name from Facebook to Meta, a smarter name, evoking the metaverse, with which he wants to build the social network of the future. But how will it work?

From what has been leaked, it will be a sort of parallel world with rules and places similar to reality in which our virtual representation (avatar) will be able to interact and live for as long as we are connected.

From the words of the CEO, it will be a mix between a real parallel world and augmented reality (place, function, in general virtual interaction also reported in reality through devices).

There is no shortage of competition. The recent acquisition of Twitter by Elon Musk, who wants to revolutionize social networking also from the point of view of freedom of expression, Nemesis or the Lego-Sony project. Yet ‘The Social Network’ seems to have the best chance of success at the moment.