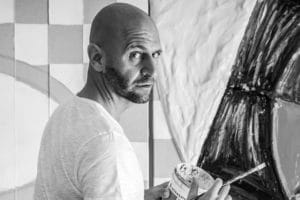 When the Universe feels tight: a leap into digital art by Cesare Catania

It has now been several weeks since Italian artist Cesare Catania officially presented his first NFT entitled “L’Uomo che Non Vede ” (B Version) (“The Man Who Doesn’t See”). In reality, the author can see very well and in the meantime, he has produced five more collections of digital art that are all true masterpieces.

Starting from his original inspirations and his traditional art, painter and sculptor Cesare Catania has personally created and developed 6 digital art collections.

These can range from metaphysics to cubism, from surreal settings in the absence of space to futuristic landscapes. All this without ever abandoning his artistic roots and his traditional art.

Cesare Catania began his academic career as a civil engineer and over the years developed an innate ability in artistic, pictorial and sculptural techniques.

He is a mature artist who, just under a year ago, entered the world of NFT with his usual personality, that of someone who takes things seriously.

After officially presenting his first NFT in Venice and simultaneously in Rome on 2 April 2022, Cesare Catania recently announced his next solo exhibition in Spatial’s Metaverse. The exhibition will contain more than 40 masterpieces between digitized artworks and real NFTs.

This is because when Cesare Catania creates his NFTs, he does not just mechanically and passively digitize his traditional artworks. Instead, he tries to fully manifest his emotions, elaborating new forms of art instead of replicating those already experienced in the past.

As he recently stated during an interview:

“NFTs and digital art should be experienced as an opportunity by artists, especially those coming from a traditional background, to develop both their inspirations”.

The artist continues the interview by stating:

“The suggestion for a traditional artist who would like to embark on the digital art business is to start thinking without filters, so try to open your mind and work with your imagination not 100% but 1000%. The Metaverse, understood as a parallel reality, gives us the possibility to express ourselves freely and completely”.

The earthly universe certainly seems to be a narrow place for the Italian artist, who encourages everyone to approach the Metaverse from a new artistic perspective compared to the traditional one.

The Italian artist’s next plans

Following the exhibition in the metaverse, the artist will be the guest of a Milanese gallery for a new solo exhibition, this time in the real world at the turn of May and June.

The artist has been very discreet on this subject. He has reserved the opportunity to tell us in a few weeks the official date of the event and the location, which has so far been top secret.

Cesare Catania will also exhibit one of his digital works at the LAC in Lugano on 13 June 2022 on the occasion of the Metaforum.

Everyone expects that he will exhibit “Harlequin in the Land of Giants ” B Version, a short film of a couple of minutes that describes Harlequin (representing mankind) intent on untangling himself from the Giants (the Corporations and Multinationals).

The post When the Universe feels tight: a leap into digital art by Cesare Catania appeared first on cryptodailynews24.com.