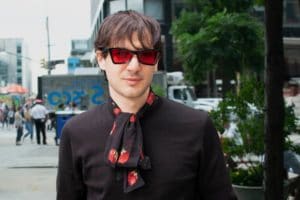 At the moment, the works sold are Air, Water and Fire, while Earth will be the next to be auctioned.

Artist Matteo Mauro sets a $ 100k record for the sale of his NFT “Four Elements” collection. Representation of the element of water in the image above

The collection consists of 4 artworks as Non Fungible Tokens, each representing one of the 4 natural elements of Air, Water, Fire and Earth.

At the time of writing, Matteo Mauro has sold his Fire, Water and Air artworks on SuperRare for 12 ETH each (over $35k), setting a new record of over $100k.

The last NFT artwork to be auctioned soon will be Earth, thus concluding the entire collection.

Matteo Mauro and his artistic technique in Four Elements NFT

According to the description, Four Elements is the result of Matteo Mauro’s incessant search for a peculiar and identifiable artistic language, which lingers precisely amidst the intricacies of natural elements.

This movement from the realistic to the abstract, from the symbolic to the conceptual, involves many different ways in which the components of Nature have been interpreted.

His drawing language insinuates and transforms, implements a process of abstraction, made up of infinite linear variations that multiply the force of the inscriptions for a magnetic result, capable of founding an extremely contemporary aesthetic, which transfers all the imaginative complexity present in the mind at the moment of the creative act.

This is not the first time that Matteo Mauro has set sales records for his NFT artworks. Last February, together with Emanuele Dascanio, De Mætaverse’s work was bought for $60,000 on the crypto art auction site SuperRare.

It was bought by collector Anesti Dhima, a well-known digital art connoisseur who already owns several hundred NFT works by artists from around the world.

De Mætaverse is a black and white work, where nuances make the difference, and is a combination of two opposing painting techniques of its authors.

The exhibition of Matteo Mauro, Emanuele Dascanio and Leo Caillard is currently running until the end of May. The exhibition is in Lugano at Galleria Cortesi and includes both physical and NFT works.