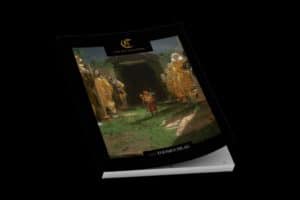 The NFT Magazine: on sale the edition with Toomuchlag on the cover

The NFT Magazine, a project created by cryptodailynews24.com and ArtRights, is now in its seventh issue, on sale on OpenSea from 2 May for 0.05 ETH with a cover artwork by artist Toomuchlag.

The private sale will be available on Thenftmag, the project’s official website, from 28 April 2022.

Toomuchlag is well known in the industry for having sold over $3 million worth of artwork on the blockchain.

It is worth noting that all previous issues of NFT Magazine have sold out and sold around 100 ETH in total.

Toomuchlag on the seventh issue of NFT Magazine

On the cover the NFT “Le Anime” by Toomuchlag

The theme of this seventh issue is artificial intelligence. In fact, each issue of the magazine is dedicated to a different topic with interviews and in-depth articles on the subject.

The NFT chosen for the cover is entitled “Anime”, a tribute to Dante. The cover artist explains:

“‘Le anime’ represents for me a very important point in my life, the end of a chapter and the beginning of a new adventure. ‘Le Anime’ is also a clear tribute to Dante, the father of Italian literature, who inspired me a lot not only for this work but throughout my career. In my work, the character who walks in the dark forest is a hero who faces his fears and decides to go beyond the limit, leaving the past behind. The Souls at the entrance represent the people I met in my life, each of them has a very important role.Le Anime is the edition of NFT that has found the most success in my works, and which has helped to create the incredible community that now follows my artistic path and supports me every day”.

The post The NFT Magazine: on sale the edition with Toomuchlag on the cover appeared first on cryptodailynews24.com.