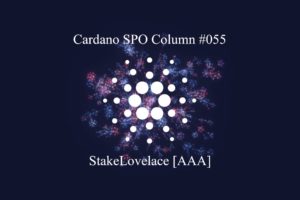 This week’s guest on the Cardano SPO Column is a stake pool operated by a technology-driven and performance-focused group of IT professionals spread around the globe: StakeLovelace [AAA].

Last week’s guest was a stake pool that is part of the Ardana ASPA and gives back to support humanitarian and environmental causes.

Hi, glad to have you here. Tell us something about your team, where are you based and what are your backgrounds?

We are two SPOs who had our own pool brands on Incentivized Testnet and joined forces for Shelley mainnet launch, both with over decade long IT backgrounds (security and software development).

I live in Australia and my co-owner is based in Portugal, so we have most time zones covered for our stake pool customer support! We try to have a decent geographic coverage for our infrastructure placements and in addition to existing US, Europe and Asia nodes are in a process of adding an African relay.

What’s the path that led you to Cardano and to become Stake Pool Operators (SPO)?

I watched a few of Charles’ videos back in 2017 during the big crypto FOMO run-up and over the next few years, during the bear market, I followed the project as it seemed to be one of the more transparent ones with regards to keeping ADA holders up to date with progress and goals.

When, years later, Rust-based staking testnet came into existence, we became a part of a small friendly bunch of similar enthusiasts on Telegram, the group that later became known as Operators Guild. The Incentivized Testnet was certainly a wild ride (especially in the first third of its lifetime, with network stability being on a constant rollercoaster) but a lot of useful lessons were learned that prepared us for eventual mainnet stake pool operation.

What are multi-pools and how are they a danger to decentralization?

Multipools come in a lot of shapes, sizes and colors… some are rather inevitable (e.g. corporate entities with their hands on a lot of ADA, like exchanges and financial institutions), others are manifestation of people’s insatiable appetite for more profits, some are the fruits of SPO to ADA whale(s) relationships, and others might be a fundraising mechanism for the flavour of the month tokens-now-proct-later ISO.

While it’s true Cardano is doing better than most, over 50% of active stake is delegating to a relatively small number of unique entities – and while it’s not meant to be everybody-who-spins-up-a-pool-gets-participation-award-prize stake pool network, there are still plenty of examples of disproportionate amount of stake, relative to the contributions to the ecosystem or some other worthwhile causes.

It’s a volatile mix of fairly predictable human nature and protocol incentives, with some room for improvement and hope – we try to be part of the voice that questions the status quo and seeks transparency behind decision making (or lack thereof).

Cardano is expecting the Vasil hard fork in June. Can you tell us what will that entail and what are you looking forward to following this upgrade?

Major changes in Vasil, from my understanding, seem to be improvements on Plutus / smart contract side of things (with a few of the bigger under-active-development projects holding off their main releases until those changes are rolled out), but also expecting some node performance optimizations to be rolled out too, as this seems to be a year of node operation streamlining.

Thank you kindly for your time. Any final thoughts? Where can people stay in touch?

You can find us on Telegram, on Twitter or I’m usually roaming in the Stake Pool Best Practices channel as @homersapiens. Stake pool’s website.

Let’s try to keep the network as decentralized as we can, everyday decisions of delegators matter, as does delegator education (alas very little of it these days revolves around future network health). Hoping for some long overdue parameter changes to help the situation too – fingers crossed.

Disclaimer: The opinions and views of the SPOs are their own and do not necessarily reflect those of the Cardano Foundation or IOHK.