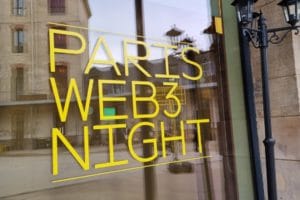 Sandbox and news with Arianne, Poap and Dorami

A few days ago, during the Paris Blockchain Summit event, a new press conference was held by the French company Sandbox, the famous metaverse, to announce its latest innovations.

Sandbox’s innovations announced at the conference

Unfortunately, the CEO and founder of Sandbox, Sebastien Borget, was unable to attend the press conference, as he caught Covid-19 on his way back from the NFC Summit event in Lisbon.

Thus, VP Marketing Rahim Attaba, who has been in this role for about three months, took the floor in his place.

One of the first novelties announced during the conference was the collaboration with the French brand Arianne, which had already been hinted at during the Lisbon event a few weeks ago.

With Sandbox, Arianne will make it possible to use clothes purchased in reality also in the metaverse.

During the presentation of the project, a video was shown of how the app works, with the example of the user of the future, Zoe, who will be able to decide to buy a bag in a physical shop and, using the Sandbox app, have the same bag for her avatar.

Following this presentation, a panel on gaming was held in the presence of Lucas Verra of Poap, Maximilian Stockl of Dorami, Benjamin Charbit of Darewise and Rahim Attaba of Sandbox.

Attaba, when asked why companies should use the metaverse, said:

“The good reason to enter the metaverse is to increase engagement and create new experiences for our community, trying to move from web2 and web3”.

In fact, according to him, the metaverse should be an entertainment platform whose value is the experience it can provide to its users.

In this perspective, the metaverse is the meeting place between content creators and their customers, as was the case with Gucci, one of the companies that decided to use Sandbox.

In order to do this in the best possible way, and also with a view to becoming increasingly decentralized (as Borget also explained in Lisbon), one of Sandbox’s objectives will be to connect the various metaverses.

Moreover, in order to give advice to companies that want to use this technology, the panelists suggested that they should not try to replicate reality in the metaverse but provide additional experiences where imagination is the only limit.

Alexander Tsydenkov then took the floor at the conference and presented the second edition of NFT Day, which will also be held in Paris in February 2023.

In fact, on 12 April, before the Paris Blockchain Summit, the first edition of NFT Day was held, sponsored by Sandbox.

Attending the event, the DJ explained how he entered the NFT world a few years ago, with little success, but how he then gradually launched new crypto art projects that have sold well on SuperRare.

“An artist needs to experiment and mix different experiences, between real and virtual”.

The post Sandbox and news with Arianne, Poap and Dorami appeared first on cryptodailynews24.com.