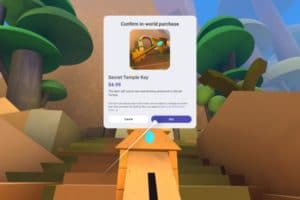 Meta, Mark Zuckerberg’s company, has announced that it is testing tools to allow Horizon Worlds creators to monetize in the metaverse by selling virtual goods and services.

Meta will enable the sale of virtual goods in Horizon Worlds

According to what was announced yesterday, Meta is testing several new tools that will allow creators to experiment with different ways to monetize what they are building in Horizon Worlds.

The beginning of something long-term, according to billionaire Mark Zuckerberg’s company, that will be able to give the creators of the metaverse a chance to earn a living.

Not only that, in order to achieve that goal, Meta also reportedly plans to further expand its $10 million Horizon Creators Fund, which was announced last October.

At the moment, only a few creators will be able to test the new tools and start selling virtual objects and effects within their worlds. The purchase of such items in Horizon Worlds will initially be available to people of legal age in the US and Canada.

In addition to being able to purchase in-world items, the company announced that it is also testing a dedicated bonus program for Horizon Worlds creators for participants in the US.

These are monthly payments that creators will receive for reaching certain goals. At the moment, creators will be rewarded for building worlds that attract the most time spent.

On this subject, in a video recorded in virtual reality, Zuckerberg said:

“The metaverse — by nature of its not being limited by physical space — will bring a new level of creativity and open up new opportunities for the next generation of creators and businesses to pursue their passions and create livelihoods. Creators and entrepreneurs will have more freedom to find a business model that works for them”.

The announcement does not specify in what currency the creators of the metaverse will be paid, however, a week ago, Meta said it is exploring ‘Zuck Bucks’, the virtual currency for the metaverse.

The Metaverse: a trillion dollar industry by 2024

Many are analyzing and making future predictions about the growth of the Metaverse industry.

“The metaverse is one of the most exciting prospects to emerge from Blockchain technology in recent times. While the idea of living our lives in a virtual playground is terrifying for some, the potential of this virtual world is plain to see. Currently valued at around $47 billion, the metaverse will reach 1 trillion well before 2024, as is currently predicted”.

Continuing in his statement, Frost says that the Metaverse’s possibilities of interest affect several sectors such as gaming or real estate. And, on the latter, Frost mentions Decentraland and The Sandbox, the two metaverse on blockchain that are breaking records in their LAND sales.

Looking to the future, Frost predicts that every digital asset company worthy of the name will have to have real estate in the metaverse, just as in the past, every serious bank had its address on Wall Street.