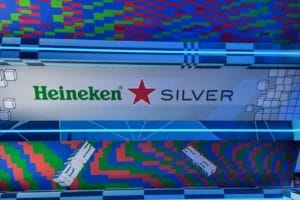 Heineken presents its metaverse in Milan, Metabar, but without crypto

Heineken, the Dutch beer company, has opened a temporary shop called Metabar in Piazza Sempione in Milan, from 6 to 10 April, a sort of presentation of its metaverse, linked to the promotion of the new Silver beer.

The presentation of Metabar, Heineken’s metaverse

The project was presented a month ago, in March, in virtual form in the metaverse of Decentraland and for a few days last week it came to life in the centre of the Lombard capital.

In the temporary shop several screens were placed to show the metaverse designed in collaboration with the artist J.Demsky, as well as a DJ station and several lounges.

In one of the lounges it was also possible to vote, by means of a simple QR code, for one’s favourite genre of music to be played during the day, should it be the most voted.

During these days of the event, many musicians and guests took turns in the Heineken Metabar, including pianist Dardust, DJ Silvie Loto, Jamie Jones, Valentina Sartorio, Brina Knauss, La Pina, Diego and La Vale from Radio Deejay, comedian Valerio Lundini and Marco Cartasegna, and many others.

Yesterday, 10 April, we at cryptodailynews24.com visited this temporary shop, which promised to unite the physical and digital worlds. At the entrance we had to register with our name and email to receive a pass called “token” by the organization, even though it had nothing to do with NFT or cryptocurrencies.

This sort of QR code to be scanned at the entrance served to unlock some activities inside the metabar, such as the purchase of drinks, but nothing more.

In this regard, going to the cashier to pay, in a completely automatic way and therefore without the help of staff, it was possible to make purchases only by credit card and not in cryptocurrency even if the avatars on the screens asked if we had it in our wallet to pay…

The impression was therefore of witnessing something not particularly technological, but just a big room where you could order a beer from a monitor (more or less as we are used to do in chains like McDonald’s, but with an automated service as well) and watch the preview of the Heineken metaverse on Decentraland on big screens.

The token, as mentioned, was not an NFT, nor were there any specific tasks involved in the metaverse. An opportunity that could certainly bring the non-expert closer to the sector, but a wasted opportunity for those who have a minimum understanding of these issues.

Bram Westenbrink, Heineken’s international manager, said in March that Silver beer was just a joke to make fun of the uselessness of metaverse. Could this have been the reason for the invention of the Metabar? This irony too?

“Our new virtual beer, Heineken Silver, is an ironic joke. It’s an idea that takes us and the many other brands jumping into the metaverse with products that are more popular there than in the real world.

For now, you can’t taste the pixels. So, we wanted to make a game out of it. We’d like to remind the whole world that there’s nothing better than a refreshing beer in the real world, including our new virtual beer Heineken Silver.“

The post Heineken presents its metaverse in Milan, Metabar, but without crypto appeared first on cryptodailynews24.com.