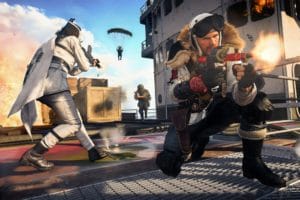 Activision Blizzard: NFTs are coming to Call of Duty?

Indiscretions start circulating from the giant Activision Blizzard regarding a possible integration of NFTs in Call of Duty 2022.

Activision Blizzard ready to launch NFTs on Call of Duty

Activision Blizzard seems to be seriously considering the possibility of introducing NFTs on Call of Duty.

NFT Inclusion is reportedly being considered by Activision pic.twitter.com/tEiK6sVK7p

Activision Blizzard is a company born from the merger between Activision and Blizzard Entertainment and is a video game giant globally. The acquisition that will make it part of the Microsoft Gaming division is expected to be completed in the course of 2022.

One of his most famous video games by far is Call of Duty (COD), born in 2003 and still very famous, as a new version keeps coming out every year.

The 2022 version is developed by Infinity Ward and is expected to be a next-gen sequel to 2019’s Modern Warfare, featuring a new Warzone.

We’ve got all the intel you need heading into Season 2 (and beyond): https://t.co/imT5GQrCUl

In the official announcement post of February there is no trace of a possible integration of NFT, but according to some sources, the revision of the Call of Duty’s UX/UI includes the introduction of new features to customize ACTV accounts, including Global Calling Cards & Emblems, and avatars.

For these new features, Infinity Ward and Activision are considering using NFT.

This evaluation has been underway for some months now.

NFT in gaming: an opportunity not to be missed

NFTs are ready to join the beloved Call of Duty

To tell the truth, the opposite would seem stranger today, namely that they chose not to use NFT in their flagship game, given that Non-Fungible Tokens are now spreading like wildfire in the world of online gaming. They also represent an opportunity that would make little sense not to exploit.

However, its arch competitor, EA, has backtracked from this point of view, as it had announced a role for tokens within its games but then slowed down by postponing the integration to the near future.

Furthermore, now that Microsoft is behind Activision, it will be necessary to see if the parent company will agree on this choice.

In this regard, however, it must be said that Microsoft is already involved with both the technology and the NFT market, so it seems unlikely that it will oppose such a choice. However, some time ago, Microsoft Gaming CEO, Phil Spencer, expressed some concerns about NFTs, suggesting that the company he directs is not interested in using them.

The context therefore appears complex and not at all clear, but at least in theory the NFTs could really be integrated into Call of Duty for example for the emblems, skins and cards that players can unlock, or to sell traditional game items.

It will probably be necessary to wait for the official details of the new 2022 version of COD to understand if the company will choose to truly integrate them, or not.

The post Activision Blizzard: NFTs are coming to Call of Duty? appeared first on cryptodailynews24.com.