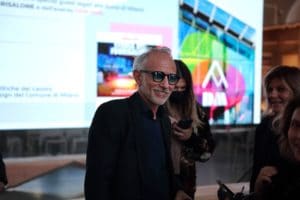 Carlo Ludovico Russo, editor of DDN magazine, together with several protagonists of the history of design, speaks at the presentation of the book: “The history of Fuorisalone, temporary events, lasting effects”.

DDN presents the book on the history of Fuorisalone

Milan – 5 April 2022. In the heart of Milan at the ADI Design Museum, Piazza Compasso d’Oro 1, from 6:30 PM (CET), there was the presentation of the book on the history of Fuorisalone with the author, Roberta Mutti, the actress Cristiana Capotondi, Milanese by adoption, and Patrizia Groppelli, a journalist who loves the social Milan.

There were also a number of leading figures from the history of design and the book, such as Gisella Borioli, Enrico Baleri, ADI President Luciano Galimberti, as well as the editor of the book and DDN magazine Carlo Ludovico Russo.

Design Week was supposed to start yesterday, but for the third year running it will be cancelled due to the global covid pandemic. The long-awaited event, however, will still be held in the second week of June.

Whereas the date of 5 April will be an opportunity to talk about some of the innovations we will be presenting during the next Fuorisalone.

The event on 5 April has the task of presenting the book: “La storia del Fuorisalone, eventi temporanei, effetti duraturi” (The history of the Fuorisalone, temporary events, lasting effects) to an audience not only made up of insiders. This is the first publication on the history of Milano Design Week, the unique lifestyle event that has been a global reference point for the design community for over 40 years.

Written by Roberta Mutti and published by DDW (Design Diffusion World), it reconstructs the Fuorisalone from its origins to the present day and includes interviews with the people who, over the years, have played a fundamental role in creating this phenomenon, from Gisella Borioli, Giulio Cappellini, Roberto Gavazzi and many others.

The book tells of places in Milan that have contributed to making it special, such as the Basso bar, whose cocktails have become a meeting place even during the fair. The districts of the Lombard capital are transformed, during the period of the fair, into the scene of events and evenings of social gatherings, and not only linked to the world of design.

During the presentation, the guests will review the most interesting moments of the past editions and those that in the collective imagination have become a celebration for the city of Milan in social, industrial and commercial terms.

The evening will also be an opportunity to give some information on the DDN HUB event, which will be held in Milan from 6 to 12 June and for the sixth year running will take place at the foot of the Castello Sforzesco.

The event, whose artistic direction will be followed by Studio Rotella, promotes a series of initiatives that will last for a week and will give voice to the main themes of Italian creativity.

The intention is to support the design industry and communicate it at an international level thanks to a series of talks in a space of about 500 square metres that will take care of the participants and their surroundings thanks to the support of Bertone Design, New Crazy Colors and their partners.

The events will also be in a digital version. In fact, the event will be present in a metaverse and can be visited with immersive technology from anywhere on the planet and both digital and physical users will be able to participate in an auction of the projects on display and transformed into NFT.

The auction will be organized at the end of the event and part of the proceeds will go to charity. The theme of the initiatives during the week will be the search for a balance between sustainability and technology.

The post DDN tells the story of the Fuorisalone with the author of the book Roberta Mutti and some guests linked to the history of Milan appeared first on cryptodailynews24.com.