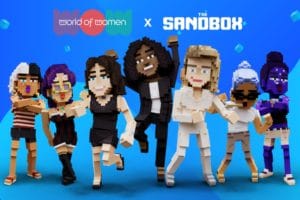 The Sandbox: presentation of the metaverse’s novelties at the NFC Summit in Lisbon

Yesterday, 5 April 2022, at 12 PM, a press conference was held by the French company The Sandbox in the presence of co-founder and COO Sebastien Borget during the Non Fungible Conference in Lisbon.

The Sandbox’s figures presented at the NFC Summit in Lisbon

During the press conference, Borget first outlined the numbers of his metaverse. Impressive figures if we think that a year ago they were less than half.

In total, The Sandbox has 2.3 million registered users with a wallet, 20,000 land owners, 200 people in the company’s team, and several high-level partnerships with Gucci, Snoop Dogg and other fashion and music brands.

In addition, the alpha season 2 event held in March has just concluded, at which the Sandbox team gave away 9 million SAND tokens, or approximately $30 million at today’s exchange rate.

One of the team’s current focuses is to make NFTs interoperable, so that all Non-Fungible Tokens can be used in the metaverse in the form of avatars, land, game assets and so on.

With this in mind, Sandbox has recently partnered with the famous World of Women collection of NFTs, to which Sandbox’s foundation has given $25 million to continue the development and roadmap.

In addition, those who own these WWM NFTs can access them on Sandbox and get their own in-game avatar with the likeness of the woman drawn on the NFT in their possession.

Sebastien Borget demonstrates the integration of World of Women on Sandbox

The same thing will be done in the future with several other famous NFT collections, including Snoop Dogg’s Doggies, the series of Non-Fungible Tokens created by the famous rapper and consisting of 10,000 avatars natively in 3D for use on the metaverse.

In addition, Snoop Dogg, also known in the industry as a great collector of NFTs under the pseudonym Cozmo de’ Medici, has composed a song for the metaverse, with a trailer presenting his mansion on Sandbox.

In the future, Borget has announced similar collaborations with the music group Blond:ish and also with Steve Aoki, who is also already famous in the NFT world.

The partnership between Arianne and the metaverse

During the press conference, Borget also explained the collaboration between his metaverse and Arianne, a French fashion company, in order to bridge the gap between physical clothing and its digital transposition in the metaverse.

Essentially, people who buy these innovative clothes will be able to scan them and use them as NFTs in the metaverse on their avatar. A demo of this application will be shown next week in Paris during the WEB3 Night event, by invitation only.

Sandbox on the way to decentralization

Borget also explained that the path the company is now taking is to become fully decentralized. This could happen in two to three years, according to the COO of The Sandbox.

For the moment, it is true that the SAND token gives broad powers to its holders, but it is not yet a user-driven metaverse, as the community has no power over the roadmap or gameplay.

However, at some point in the future, this will be possible and the Sandbox foundation will become a full-fledged DAO. In addition, Borget would like everyone to be able to develop on Sandbox independently in the future.

Finally, another interesting point from the press conference is the fact that Sandbox is working on a mobile version of the app, and the idea of games on consoles is also on the horizon.

The post The Sandbox: presentation of the metaverse’s novelties at the NFC Summit in Lisbon appeared first on cryptodailynews24.com.