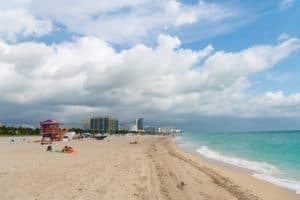 Bitcoin 2022 kicks off in Miami

Bitcoin: One of the most important conventions on the world of cryptocurrency and blockchain, is kicking off in Miami and will run until 9 April

The all-important Bitcoin 2022 convention will be held in Miami

One of the biggest, if not the most important, cryptocurrency and blockchain convention in the world will be held today in the beautiful setting of the new modern exhibition space, opened a few months ago at Superblue in Miami.

There will be a rich line-up of speakers, starting with the eagerly awaited President of El Salvador Nayib Bukele, who will talk about how the country has reacted to the decision to legalize Bitcoin in the country on 7 September.

Also invited to speak are Antony Pompiliano, one of the world’s most-followed cryptocurrency influencers and investors, who will hold a heated opening debate with Mike Novogratz, CEO of Galaxy Investment Partners, a company focused on investments in the cryptocurrency space.

Leo Zhang, founder of Annica Research, Ethan Vera co-founder and COO of the specialist firm Viridi Funds and Brian Wright vice-president mining at Galaxy Investment have been invited to talk about mining.

Peter Thiel, co-founder of Paypal and one of the main and first investors in Facebook, who has long been bullish on Bitcoin and the crypto market in general, will speak about the new prospects of blockchain and crypto.

Also highly anticipated are the planned speeches by Senator Cynthia Lummis, who has long professed herself crypto-friendly, having even admitted to having invested in Bitcoin, and then that of former world tennis champion Serena Williams, whose family life is the subject of the film that allowed Will Smith to win an Oscar.

Serena has recently invested in the NFT market, even joining the board of Sorare, the well-known NFT fantasy football company.

cryptodailynews24.com will be a media partner at the very important event, which in the past has hosted great events and announcements, destined to revolutionize the cryptocurrency and blockchain market.

These include the debut of Ethereum and the announcement of El Salvador’s President Nayib Bukele’s intention to make BTC legal tender. In the last edition, the former CEO of Twitter, Jack Dorsey, was harshly criticized during his speech, while talking about the new Square projects, by some participants who accused him of censorship.

Who knows, maybe this year’s conference will include some events that will stir up the cryptocurrency market, which is already in turmoil due to the development of NFTs, DeFi and Metaverse, which are exploring the new Web3.0 ecosystem.

The post Bitcoin 2022 kicks off in Miami appeared first on cryptodailynews24.com.