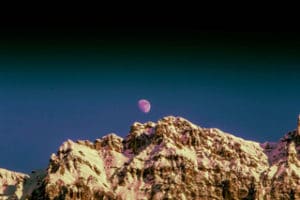 Italian artist Yuri Catania is finally ready to launch his NFT project entitled MyGeneroso which will be published on Rarible and OpenSea.

As the title of the collection suggests, it is Monte Generoso, the main panoramic peak of the Ticino Canton in Switzerland, that is portrayed in Yuri’s photographs.

The drop consists of 7 physical works (x5 each), i.e. 35 works to which an equal number of NFTs correspond: whoever buys the physical work gets the Non-Fungible Token and vice versa. The starting price as a basis for these drops is 1.30 Ethereum, i.e. approximately 4000 euros.

The exhibition has been open to the public since 3 April in Switzerland at the summit of Monte Generoso, which can be reached by the Monte Generoso railway cogwheel train. The departure point is precisely in Via Lüera 1, 6825 Capolago. The artist was present at the invitation-only opening on 2 April. The exhibition will then continue until 30 June.

In addition, after this smaller collection, another drop of 365 NFT will follow, one for each day of the year, with monthly drops of 31/30 NFTs, sold in presale at 0.05 ETH and in public sale at 0.08 ETH. When the previous month sells out, the next one is released.

The text of the exhibition curatorship by Yuri Catania

“In this photographic exhibition set up at the Fiore di Pietra, at the top of the Generoso, Yuri Catania brings his intimate and personal vision of the mountain itself. He does so by returning to his privileged medium, photography, used not as a means of describing reality, but rather as an instrument of introspection and dialogue between the artist, nature and the territory.

From his Casa Galleria in Rovio, Yuri has the privilege of a direct view and an exclusive perspective on the mountain, which becomes for him a daily presence to contemplate and an essential point of reference: a friend, part of his most intimate circle of relations.

The subtle melancholic traits that have always permeated Yuri’s work, combined with his fascination for the rarefied and the indefinite, give substance in this series of seven photographs to an emotional vision of Generoso, in which the imposing rocky profile dissolves into a continuous and constant dialogue with the sky and the clouds above and with the artist who, from below, observes it and speaks to it.

The exhibition is also configured as a sort of portal of passage from the real to the virtual: a point of access to the digital metaverse, in which other hundreds of Yuri’s photographs find, in the form of NFTs, a wider and deeper exhibition space”.

Yuri Catania is an artist and photographer. He lives in Switzerland and sets up his creative atelier in Rovio. He is the author of the street-land art exhibition “I Gatti di Rovio”, for which he dedicated the largest installation entitled “Wall of Fame” to Monte Generoso, which can still be seen in the centre of the municipality of Rovio.

2021 is the year that binds him to the territory with the exhibition American Flag Videogame at the ARTRUST SA gallery in Melano and his participation in the street art festival in Maroggia with a work made with the paste-up technique, already widely used for the project of the Gatti di Rovio. He launched the photographic project Black Flower Secret Garden, which led him to exhibit again at the Artrust gallery in Melano and then to tour cities such as Zurich, Milan and Lugano.

Painting, drawing and photography have always been the tools he uses to express his feelings. He began his career as an illustrator, but soon photography became his most important means of expression as well as his work.

He established himself as a fashion photographer in the commercial and editorial fields. He opened a photographic production company in New York and travelled the world for more than 15 years as a fashion and luxury photographer. At the same time he pursued his innermost impulse, which is the expression of a subtle positive and melancholic way of seeing the world, and created an artistic project entitled “No Fashion” Places.

The project was born as a counterpoint to the work he does on commission and is manifested in his freer thinking, free from conditioning. The turning point came in 2013 when curator Rene Julien Praz noticed his work and invited him to exhibit in Paris, first at the Palais de Tokyo and then at the Perrotin Gallery in 2015 in two “Art Is Hope” collectives.

He moved to live in Switzerland where he sought a more favourable environment to focus on his art. In a few years, he opened an art gallery in Rovio at the foot of Monte Generoso, in a wonderful natural environment.

Since 2010, he has been pursuing the photographic project Una Vita On The Road, travelling, on board an Airstream caravan, the United States of America with the aim of photographing places, people, food, signs, roads, cities, landscapes and cars during the various eras: Obama, Trump and today Biden, in order to realistically capture a cross-section of a society in deep decay and devoured by consumerism. He published his first book “No Fashion Places of America” in 2016.