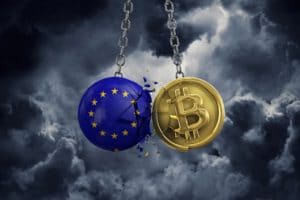 Tighter controls on crypto by the European Union

Yesterday, two committees of the European Parliament voted in favour of a revision of the money transfer directive to include crypto.

This decision comes at a time when the EU has just legislated new cryptocurrency regulation, with MiCA approval.

In the first prospectus of MiCA (Markets in Crypto-Assets regulation), the possibility of banning the Proof of Work consensus model was put forward, as it was considered to be too energy-intensive. Fortunately, this possibility was later dismissed by a vote in the House.

However, the law had referred to the forthcoming approval of a new regulation on cryptocurrency transfers. Yesterday, the vote in committee came down to this point, and this could put cryptocurrency companies in serious difficulty, both in terms of privacy and innovation in the sector.

Bitcoin and all cryptocurrencies under the grip of the EU

What the new directive entails

According to the new EU transfer directive, operators offering crypto services, such as exchanges and wallets, would have to share their customers’ information.

The first negative comments were certainly not long in coming, starting with the giant Coinbase, which warned in a note that the rules will usher in a surveillance regime that will stifle innovation.

What baffles many in the crypto sector is that there is a lack of serious and precise regulation that would facilitate the activities of those who operate in the sector in a regular and correct manner.

Some countries are completely deregulated from this point of view, while others, such as China, have moved towards an indiscriminate and absolute ban on the entire sector.

In particular, going back to what happened yesterday in the European Parliamentary Committee, this is a proposal presented for the first time last year by the EU Executive Commission.

In a nutshell, according to the European Commission, companies whose business is buying, selling and transferring cryptocurrencies would have to obtain, store and present information on those involved in the transfers. This would go against the decentralized and privacy-intensive nature of cryptocurrencies, primary characteristics on which the sector has been based since its inception.

Initially, the Commission had proposed to apply the rule only to transfers with a value of €1,000 or more, but according to the agreement between the parties, this rule was dropped.

The post Tighter controls on crypto by the European Union appeared first on cryptodailynews24.com.