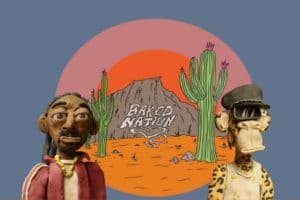 Clay Mates announced a partnership with Snoop Dogg and Champ Medici two days ago. The drop will see the two team up with Clay Mates to release NFTs on Cardano.

Exactly one year after his debut in the NFT world with his first collection “A Journey with the Dogg”, the famous American rapper announces via Twitter a new collaboration for an NFT collection on the Cardano blockchain.

This will be fun

In September, the rapper announced that he was a ravenous collector of NFTs, including some pieces from the CryptoPunks, Meebits and Art Blocks collections. The value of his collections is estimated to be around $17 million.

With this new partnership with Clay Mates, Snoop Dogg takes a further step into NFTs and the metaverse. The rapper will be featured in Clay Nation’s new collection.

The new collection: what’s in it

It’s a collection of 10,000 digital characters with algorithmically assembled and handmade clay features. Each character is a unique NFT on Cardano’s blockchain.

Owners of Clay Mates NFTs will be given 3D versions of their NFTs which they can then use to explore the Clay Nation metaverse. While this will initially be exclusive to owners only, in the future, according to the intentions of its creators, the metaverse will also be available to non-NFT owners. To this end, Clay Nation will become a venue for various virtual events.

The rapper’s new collectables can be found in a virtual space dedicated to him. In addition, unreleased Snoop Dogg tracks are expected to be released exclusively for those who purchase NFTs from the collection.

Fifteen days ago, the rapper, along with Wiz Khalifa, announced that he would be releasing a musical NFT featuring Bored Ape Yacht Club and ApeCoin consisting of 8 modules. This news had contributed to the rise of the new token, which entered the top 100 digital currencies by capitalization.