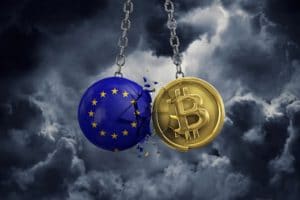 Coinbase, fears over crypto regulation in the EU

Coinbase appeals to its EU users to take action against a new crypto regulation being worked on by the European Parliament.

Changes to the crypto regulation in the EU, what changes for Coinbase

In the email received by users, Coinbase informs that the latest changes to crypto regulation in Europe could change the exchange’s relationship with its customers.

Specifically, the AML regulation on transferring funds to prevent money laundering is being particularly punitive towards cryptocurrencies rather than fiat currencies.

The problem reported by Coinbase concerns all transactions above €1,000. In practice, if the change is approved, Coinbase would have to report every transaction over EUR 1,000 to the financial authorities, in particular if the transfers involve wallets outside of Coinbase. This would also have to be done in the case of non-suspicious activity. So always. Not only that, but Coinbase, having to transfer information also on self-hosted wallets, would be forced to refuse the transaction.

“There is no precedence for this kind of surveillance regime. If the EU required your bank to report all of its customer’s transactions anytime they were involved in a transaction over 1,000 euros, or to report non-customer’s private information any time a customer interacted with them, the banks would push back. That’s what we are doing now”.

The appeal to MEPs

This is why Coinbase is asking its users to appeal to MEPs via a special form.

The ECON Commission will decide on the regulation on 31 March. In contrast to the ban on PoW under MiCA, it seems that the MEPs themselves are not inclined to make any changes for the better in the crypto sector.

The proposed system would create a profound distinction between banks and exchanges, with the latter forced to authorize transactions only if the identity not only of the user but also of the wallet is clear.

This would result in a freeze in the activities of Coinbase, as well as for other exchanges.

“Bad facts make bad law. We see this in jurisdictions all over the world, especially when it comes to digital assets. Unfortunately, we are about to see this again — this time in the European Union — in the form of a revision to the Transfer of Funds Regulation. If adopted, this revision would unleash an entire surveillance regime on exchanges like Coinbase, stifle innovation, and undermine the self-hosted wallets that individuals use to securely protect their digital assets. The vote will likely take place this week so time is running out”.

One can only hope that the response from Coinbase users will convince the committee members of the error that would constitute the new law.

The post Coinbase, fears over crypto regulation in the EU appeared first on cryptodailynews24.com.