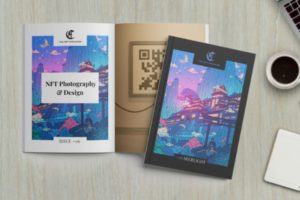 The NFT Magazine: Sixth issue of the magazine with SeerLight on the cover coming soon

The NFT Magazine, a project created by cryptodailynews24.com and ArtRights, is getting ready for its sixth issue, on sale on OpenSea from April 2nd.

This sixth issue features an NFT on the cover created by artist and illustrator SeerLight, known in the industry for having sold over $20 million in artwork on blockchain to major collectors such as Vincent Van Dough.

The NFT Magazine and NFTM tokens

The NFT Magazine was launched with its first issue last November 2021 featuring Hackatao on the cover. Since then, four more issues have been released with Coldie, Dangiuz, Refik Anadol and Antoni Tudisco as the artists who designed the covers, which were sold as NFTs.

The owners of these NFT covers have access to the magazine and the so-called Readers Club to vote and decide on articles, interviews and the next steps of the project in general. These holders also received the NFTM token, which is both a governance and a means of payment.

With NFTM, users will be able to pay for artist drops promoted by the team of The NFT Magazine and much more.

NFTM is an ERC-20 token, so it is based on the Ethereum blockchain and on the official website it is possible to read the amount of tokens one is entitled to based on how many copies of the magazine held in one’s wallet.

The cover of the sixth issue of NFT Magazine

SeerLight on the sixth issue of The NFT Magazine

On the 2nd of April on OpenSea, sales will open for the sixth issue of The NFT Magazine with SeerLight on the cover. The price is 0.05 Ethereum per copy, while multi-copy bundles can be purchased at a discount on thenftmag.io.

SeerLight is also co-founder of the startup Capsule House, an NFT collection made with another designer called Kaejunni and also followed on Twitter by Cozomo de’ Medici (Snoop Dogg‘s nickname for the crypto art world).

This collection of 10,000 NFTs was created on OpenSea, where it traded more than 20 Ethereum. With over 120 variants, each NFT Capsule contains a truly rare and unique piece of gachapon art, a popular toy in Japan.

The NFT chosen for the cover is titled “Temple in the Mountains” and was one of his first super rare pieces and the second piece he ever dropped on SuperRare, where it was purchased by collector Vince Van Dough for 10 Ethereum.

Thanks to The NFT Magazine, it is now possible to buy one of his works at an affordable price and at the same time receive benefits such as NFTM tokens.

The post The NFT Magazine: Sixth issue of the magazine with SeerLight on the cover coming soon appeared first on cryptodailynews24.com.