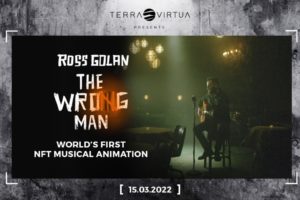 The Wrong Man, Ross Golan launches his album as an NFT

Award-winning singer-songwriter Ross Golan has launched his first NFT album The name of the album is: The Wrong Man and it is already available for sale on the marketplace – Terra Virtua.

The artist, who has been collaborating for years with big stars such as Ariana Grande and Justin Bieber, has created an NFT collection for his most loyal fans.

The collection is a mix of music, 2D animated album covers and a limited edition poster.

There is also an exclusive Platinum Edition which includes a physical copy, an animated NFT of the original lyrics handwritten by the production team, the complete film, the custom vinyl record and the opportunity to speak to Ross Golan himself for 30 minutes via Zoom.

The Platinum Edition NFT will be auctioned on the Terra Virtua marketplace on 29 March and the singer has decided that he will donate 100% of the proceeds to the Innocence Project, a charity that tackles issues of injustice.

The origin of the new album

Golan’s album, The Wrong Man, began as a folk song about a man wrongly convicted of a murder he did not commit.

Golan early in his career played this song live in clubs in Sydney and London.

Over the years, the artist turned this song into a concept for one of his albums.

He decided to compose several songs to tell the story of the invented character – Duran.

Analyzing the lyrics of this extraordinary album, it becomes clear that the story of Duran, the main character, is a heartbreaking one.

Duran is in fact a man who had a one-night stand with a woman he met in a bar but is then framed for murder by her jealous ex-husband.

The album was later made into an animated film and a stage musical by Hamilton alumni Thomas Kail.

Ross Golan, commented on the release of this new album in the form of a non-fungible token:

“I’ve been working on The Wrong Man for over fifteen years. It’s now on a journey all of its own and I’m a passenger just like everyone else. What’s fantastic about NFTs is not only the ability to deliver a mixed media conceptual album but also the ability to mint unique editions so fans can actually own a piece of The Wrong Man”.

“Working with Ross on the world’s first NFT musical, we’re really pushing the boundaries of what’s possible through NFTs and bringing something truly original to the industry”.

The post The Wrong Man, Ross Golan launches his album as an NFT appeared first on cryptodailynews24.com.