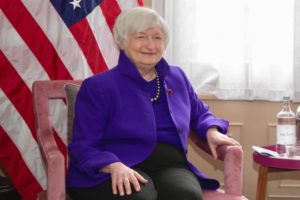 It all started with a press release published on the official website of the US Treasury, and later removed.

This press release was specifically about Yellen’s statements regarding President Biden’s executive order on digital assets.

Yellen reported that this executive order:

“will support responsible innovation that could result in substantial benefits for the nation, consumers, and businesses”.

She also said it will address the risks associated with illicit finance, protecting consumers and investors so as to prevent threats to the financial system and the economy as a whole.

Yellen has been quite critical of cryptocurrencies in the past, while the Biden government as a whole has never intervened with actions against or detrimental to the crypto world.

It is therefore not surprising that the US government’s orientation will ultimately be pro-cryptocurrency, and not hostile as Yellen has repeatedly called for.

Theoretically, a communication from Biden in this regard would be expected today, but it is not strictly certain that all details will be released immediately.

The USA is the main Bitcoin market

Cryptocurrencies in the US

The US is currently the largest country in the world in terms of computing power allocated to Bitcoin mining, and is also the largest crypto market in the world. It is extremely difficult to imagine the government being able to oppose such dominance.

Moreover, several US politicians have recently come out in favour of cryptocurrencies, such as the new mayor of New York.

The price of BTC

Last night, as soon as the news broke, the price of Bitcoin started to rise again and was back above $39,000 within a few hours. Then overnight, the price suddenly jumped above $41,000 in a matter of minutes.

Currently, the price of BTC is back in line with what it was five days ago, before the new drop to $38,000 due to fears over the war in Ukraine. It is possible that news of favourable US regulation of cryptocurrencies has helped to allay such fears, even in the face of the apparent stalling of military escalation in Ukraine.