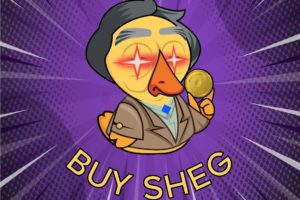 The goal of the game is to explore the world of Ducklization and establish and prosper your nation by building cities, diplomatic and trade relations, and discovering new lands and technologies. The game’s economy is based on the deflationary SHEG token, produced by all nations through Waves Ducks and by cities through a staking mechanism regulated by a smart contract.

The game was developed on the Waves blockchain to help develop and support its ecosystem, as well as for performance, decentralization and network security reasons.

This project is also designed to increase the value of NFT Waves Ducks, which will have an additional use case and become even rarer. This will also indirectly increase the pressure to buy the EGG token!

The project was conceived and made possible through the operation of one of Waves Ducks’ collective farms*, the Eggsagerated Eggs Farm.

* one of the oldest blockchains in existence and which is preparing to transition this year to “waves 2.0”, the new consensus algorithm that promises to make this cryptocurrency infinitely scalable and decentralized at the same time. Waves also boasts a decentralized exchange/wallet, with a simple user interface, lots of pairs and decent liquidity. DeFi’s toolbox is also impressive and varied, solid and well developed (Neutrino, Gravity, Vires, WX, Swop, Puzzle).

** Waves’ flagship NFT game, promoted and produced by the Waves development team. The NFT protagonists of this game are the Waves Ducks, which can interbreed with each other and create unique ducks that can be used for various activities, such as producing eggs, fighting in Duck Wars and much more!

*** Collective farms are part of the NFT Waves Ducks game: each one collects eggs from many small investors that are managed in exchange for a passive income and play a key role in the Duck Wars.

What is SHEG and what is the tokenomics of the game

Sheg is the token of the game, necessary for all Ducklization activities, from constructing buildings, units, heroes to researching technologies.

The fundamental characteristics of Sheg are its scarcity and its slow emission. In fact, the token has a limited issue (HardCap) of 10,000,000 units and the issuance is slow and regulated by in-game activities.

The token’s high-demand characteristics mixed with a finite amount of the currency are the basis for building a healthy and strong in-game economy that supports the price of the token with real value.

Moreover, thanks to the game dynamics, many of the issued tokens will be reallocated within the game, in a kind of TVL logic similar to that of DeFi projects.

All this should guarantee a generous and healthy evolution of the token price.

Read the in-depth article on tokenomics.

The game’s main characters are the Waves Ducks, who can explore, attack and defend, but above all, they can found or participate in the construction of a nation and, consequently, in the production of SHEG.

Nations are not predetermined, but must be founded by a duck through the discovery of one of the 10 Nations Palaces, which are hidden within the map.

Once a nation has been founded, any player may decide to join that nation, lending their Waves Ducks and producing SHEG for that nation.

Each nation can and must improve and expand through the pursuit of scientific discoveries and the creation of their own settlers, the units used to build cities.

Cities, which do not require the creation or management of Waves Ducks, are the productive hub of the game and can raise buildings and units, as well as contribute to the production of SHEG.

There are also special units in the game, the heroes, which have special and unique characteristics compared to normal units.

In addition, hidden rewards have been added to the map to encourage free-to-play and play-to-earn.

You do not need to own a Waves Ducks NFT to play the game and entry can be free or almost free.

The project was officially unveiled just over a month ago via the announcement of the game’s launch, which will take place during Q2 of 2022.

Along with the launch of the project, the pre-sale campaign for a portion of the tokens (5% of the total) started and ended on 21 February 2022.

All tokens purchased in the pre-sale will be blocked until the launch of the game, as well as those used for airdrops and promotions.

The team is already working on the development of the game, and with part of the funds raised they have created a waves validator node, contributing to the decentralization of the network of this blockchain!

Those who were not able to buy the token in the pre-sale have a new opportunity, since on 14 March SHEG will be listed on the AMM Puzzle exchange (Address: Puzzle.Surf) built on the Waves blockchain.

The next step will be to release the game to the public before the end of Q2 2022.

After a first phase of play, new features will be released in line with the evolution of the game itself.

The main goal for the next few years will be to build a mobile app and develop the DAO of the game, to make it fully decentralized and player-owned!

Listing and IDO on Puzzle

On 14 March 2022, the IDO* of the SHEG token will take place on the decentralized Puzzle.Swap platform (AMM Multi-Pool Aggregator built on Waves).

The token will be available for purchase through Usdn**, Waves and Egg at a starting price of $2.

All tokens in circulation are currently locked and will remain locked until the launch of the game, which will keep the price from dropping below $2 until then.

This factor also makes it particularly attractive to buy SHEG in the very early stages of the IDO to secure a bargain price!

* IDO: An acronym for Initial DEX Offering, the IDO refers to a project that launches a token via a decentralized liquidity exchange. The starting price is decided by the initial liquidity.

** USDN is the decentralized stablecoin of the Waves ecosystem, pegged to the dollar in a 1:1 ratio.

To participate in the SHEG IDO, all you need to do is have a waves.exchange wallet containing Usdn, Egg or Waves, link it to puzzle.surf and swap it as you would on any DEX AMM.

The token will be listed on Monday, 14 March 2022 at 10:00 AM CET, so make sure you are one of the first participants to get the best possible price.

Once you have purchased the token, you will be able to return it by providing liquidity within the puzzle exchange via the dedicated liquidity pool.

The token can also be used to make in-game purchases from the moment Ducklization is launched!

*This article has been paid for. cryptodailynews24.com did not write the article nor did they test the platform.