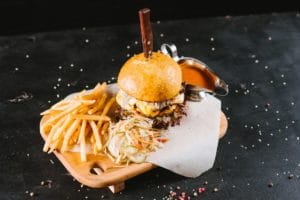 FriesDAO, the new Decentralized Autonomous Organization that wants to create a decentralized fast-food empire, has raised $5.4 million and says it is ready to issue its native FRIES token.

At the end of last month, the FriesDAO project announced that it had raised an impressive $5.4 million for its mission to create a decentralized fast-food empire.

FriesDAO raise closes with $5.4M! $FRIES claiming is expected to be this Tue/Wed.

As a Wyoming DAO LLC, a Notice of Intent to issue tokens is being filed this Monday.

An Operating Agreement has also been released, which recognizes all $FRIES holders as co-owners of the DAO. pic.twitter.com/ehyF5sSRq7

“FriesDAO raise closes with $5.4M! $FRIES claiming is expected to be this Tue/Wed. As a Wyoming DAO LLC, a Notice of Intent to issue tokens is being filed this Monday. An Operating Agreement has also been released, which recognizes all $FRIES holders as co-owners of the DAO”.

FRIES will be the governance token of the fast-food DAO, which aims to leverage blockchian to create its community and organization.

On its official website, FriesDAO describes that it is buying fast-food restaurants as a

Not only that, its vision is further described as follows:

“What’s the grand vision? Imagine a major fast-food store in every major city, materialized because of your vote. Go to one near you, flash your barcoded Fries DAO NFT, and get that free burger. Fist-bump that dude next to you who did the same. Tell him you liked that FRIES defi strategy he posted in Discord the other day. We’re going to make history”.

After that, which would be the current phase, the DAO would be ready to buy franchises, negotiating with owners of franchises and brands to buy well-known fast food restaurants using the FriesDAO community treasury.

Subsequent phases also include expanding the empire, creating a reproducible framework for community governance to influence shop improvements or expansions and shape the utility. Not only that, future goals include getting NFT coupons for free food.

The DAO phenomenon continues to grow

After NFTs and DeFi, now the phenomenon of DAOs using Blockchain to create a Decentralized Autonomous Organization is also growing.

DAOs can be economic like this one by Fries, but also created for a very specific purpose that supports an idea, a value, or even a man in prison.

This is the recent case of the Ukraine DAO, the new initiative of Pussy Riot, Trippy Labos and PleasrDAO who thought of raising funds through Ethereum NFT to support Ukraine after the attack by Russia.

Or, the FreeRossDAO dedicated to supporting Ross Ulbricht, founder of Silk Road who is currently serving a disproportionate prison sentence of two life sentences plus 40 years.