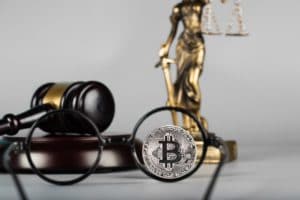 Bitfinex hack, one of those arrested towards a plea deal

One of the two arrested for laundering Bitcoins from the hack at Bitfnex could ask for a plea bargain and avoid trial. That would bring to an early close the legal case that saw the largest Bitcoin seizure in history.

Bitfinex hack, one of the arrested will go to plea bargaining

Last February 8, the couple composed of rapper and entrepreneur Heather “Razzlekhan” Morgan and her husband Ilya Lichtenstein was arrested on charges of laundering BTC from the exchange theft with over 2,000 transactions. Now the woman could ask for a plea bargain, at least according to what CNBC reports.

At the moment, Heather Morgan has been released on a $3 million bail, while her husband is still in jail.

In a video link appearance with Judge Robin Meriweather, the woman was recapped all the charges, which see her accused in particular for laundering stolen Bitcoins at Bifinex. It should be pointed out that the two arrested are not charged with the actual hack. But apparently, there would be overwhelming evidence of the transactions made to clean up the proceeds of the theft.

The next date before the judge will be March 25.

According to some experts listened to by CNBC, all the clues would confirm that Heather Morgan will make a plea bargain. In practice, she will admit her guilt, perhaps hoping to get a discount on a possible sentence.

In 2016, the Bitfinex exchange was the victim of a hack in which over 119,000 BTC were stolen. During the arrest of the Bonnie and Clyde of cryptocurrencies (that’s how the pair was dubbed), 94,636 BTC from the very theft were seized. That was the largest seizure in cryptocurrency history.

However, it is still unclear who, materially, is the author of the hack that led to the cryptocurrency theft.

The story becomes a Netflix series

The case is about to become a TV series produced by Netflix. In fact, the streaming giant has announced that the story will become a documentary TV series. It will be produced and directed by Chris Smith, known for Netflix’s other big hit, Tiger King.

The post Bitfinex hack, one of those arrested towards a plea deal appeared first on cryptodailynews24.com.