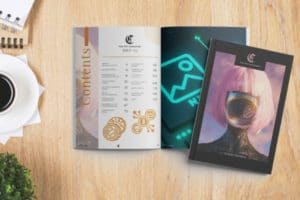 The fifth cover of The NFT Magazine will feature an NFT created by Antoni Tudisco and it will be available on OpenSea starting from March 2nd, 2022.

For Readers Club Members (people who bought a previous issue of The NFT Magazine) or people who subscribed to the newsletter, on thenftmag.io it is possible to buy the Antoni Tudisco cover now, in pre-sale.

More info about The NFT Magazine

The NFT Magazine, created by cryptodailynews24.com and Italian company Artrights, has already sold thousands of copies during its first four issues.

The first issue of The NFT Magazine had an important artist on the cover: Hackatao, which was sold on November 2nd in less than 24 hours, selling 500 copies and now its value of 0,29 ETH.

While the second issue was with Coldie that was sold on December 2nd selling about 600 copies and it’s now at 0,11 ETH.

Who is Antoni Tudisco, the cover artist of NFT Magazine

Having been featured in Vogue, Highsnobiety & Hypebeast and winning several notable design awards, Tudisco launched an NFT Collection in collaboration with the famous dj and producer Steve Aoki.

He is currently working on the design of the Plein Plaza, the new Decentraland headquarter of the fashion stylist Philip Plein, built with a budget of over 1.4 mln dollars.

The cover for this fifth issue of The NFT Magazine is called “ETHEE V2”.

This artwork was part of the “ETHEE V2” drop of Antoni Tudisco on Nifty Gateway, reserved for the collectors who own at least one NFT by Tudisco.

This fifth issue is in 666 copies and it is about cryptocurrencies and tokens.

Unsold copies will be burned to ensure the rarity of these NFTs.

This project also sees the partnership of big blockchain companies like Algorand, The Nemesis, Zilliqa and Bitcoin Cash.

As is common with the NFT world, the NFT Magazine will be on sale on Opensea.

To buy these NFTs, you will need to have Metamask or another wallet compatible with Wallet connect (e.g. Eidoo) and some Ethereum to spend for gas fees.