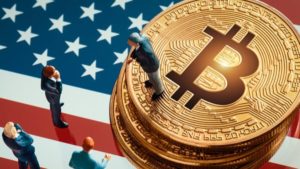 US crypto: dispute between Yellen and White House slows everything down

The state of play on President Joe Biden’s launch of a cryptocurrency policy in the US has been delayed due to a split between Treasury Secretary Janet Yellen and White House officials.

US crypto and the dispute between Yellen and the White House

The executive order to establish a government-wide strategy for digital assets was reportedly due to be signed earlier this year, but a dispute between Treasury Secretary Janet Yellen’s staff and officials at the National Economic Council has slowed its progress.

It concerns an order from Joe Biden that would have given exploratory mandates to several US government agencies on both crypto and even stablecoins and CBDC, but Yellen sees the plan for an executive order as unnecessary.

Thus, the digital dollar issued by the central bank or CBDC could also be involved in the cryptocurrency policy. In this regard, Yellen does not want pressure from the White House, and says that the Federal Reserve is still working on the topic and that it needs time and space to draw its conclusions.

In this regard, both the Treasury and federal regulators, including the Securities and Exchange Commission, or SEC, have made progress in providing the industry with more clarity on US rules around virtual currencies.

US: crypto targeted by Yellen and the SEC

In essence, Yellen seems to be strongly opposed to all things cryptocurrency and, together with the SEC led by Gary Gensler, says she is ready to lay down effective crypto regulation.

At the end of last November, even former US presidential candidate Hillary Clinton seems to have started her own battle against cryptocurrencies, stating that crypto needs regulation.

However, Gensler is reported to have recently shown his views on cryptocurrencies by calling them “securities”.

In the case of BlockFi, which was fined $100 million, the head of the SEC allegedly found that the crypto lending tool offered by BlockFi did not comply with the imposed rules.

Basically, the SEC considered the instrument to be a security, whereas BlockFi is not registered to offer securities. With regard to cryptocurrency lending platforms, the SEC has already ruled that markets must comply with the Securities Act of 1993 and the Investment Company Act of 1940.

The post US crypto: dispute between Yellen and White House slows everything down appeared first on cryptodailynews24.com.