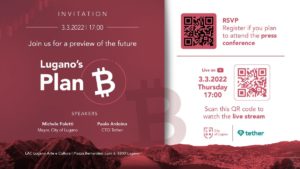 Lugano the European capital of Bitcoin thanks to Tether

A few days ago, Tether announced that it is helping the Swiss city of Lugano to become the European capital of Bitcoin.

#bitcoin and stablecoins are revolutionizing the financial sector. #tether and The City of Lugano

@luganomycity are teaming up to transform Lugano into the European #bitcoin capital.

Zug: further ahead in the crypto sector

Bitcoin and stablecoins are revolutionizing the financial sector, and Tether’s USDT is the most widely used stablecoin in the world.

This is why Lugano’s Plan ₿ was conceived, with the clear goal of making it the crypto capital of Europe.

In the US, Miami and New York are trying to compete for the title, while in Europe the city currently ahead in the crypto sector seems to be Zug, another Swiss city.

Lugano is already a well-established financial and crypto centre, but with the help of Tether it could really have what it takes to beat all the competition, including Zug.

A meeting was organized to present the project, which has already sold out.

Lugano's Plan ₿ announcement event was fully booked in less than 24h ! That's why we decided to move it to a bigger venue. 300 more seats available!

Reserve yours now and join us at Palazzo dei Congressi, Piazza Indipendenza 4, 6900 Lugano

For this reason, it has been moved to a larger location, but it is possible that the additional 400 seats will soon be sold out.

We were fully booked again yesterday! So we decided to move to the biggest room available! 400 more seats to the unveiling event of Lugano's Plan ₿ are available now. Reserve your seat here https://t.co/MiEkC9gcRP pic.twitter.com/OoEFsjP6mr

The conference will take place on 3 March, and will be attended by the mayor of Lugano Michele Foletti and the Chief Technology Officer of Tether Paolo Ardoino.

It is therefore an official initiative of the city of Lugano and its political administration that takes note of the fact that the city itself is already for all intents and purposes a crypto centre, due to the many activities of the sector that operate there, including the publishing company of this newspaper.

The ambition, however, now goes far beyond that of being a crypto-friendly city, or a centre equipped for companies in the sector. The idea of becoming the European capital of Bitcoin, thanks to the help of the company that issues and manages the most important stablecoin in the world, is certainly very ambitious but does not seem at all impossible.

As a matter of fact, Lugano is currently one of the very few European cities that can realistically aspire to reach such goals, also because for instance the main European financial centre, London, has not been able to prove yet that it can become a real European cryptocurrency capital.

Thanks to Tether‘s contribution, Lugano is now a serious candidate not only to become Zug‘s main competitor, but to become the main European centre for the crypto sector.

The post Lugano the European capital of Bitcoin thanks to Tether appeared first on cryptodailynews24.com.