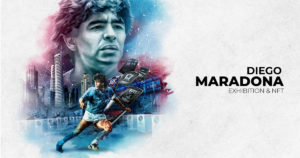 So it’s all true, in order to celebrate the life and deeds of one of the most talented players in the history of football, Fanz.com has managed to get consent to launch an entire collection of non-fungible tokens based on Diego Armando Maradona.

Fanz is a Manchester-based tech company that is looking to bring the world of football into the fascinating web 3.0 ecosystem.

Fanz is designed by fans for fans of the world of football, aiming to unite players and teams with digital artists and blockchain technology.

Their goal is to create NFTs about the world’s most loved and followed sport and then expand into the metaverse.

Fanz‘s vision is to help the next generation of football fans become owners rather than just customers and users thanks to blockchain.

The launch of the D10S NFT collection

The NFT collection, which will celebrate Maradona’s life through 10,000 non-fungible tokens, will launch in April 2022 and a percentage of primary sales will be donated to children’s charities in Buenos Aires and Naples.

“Fanz founder Sam Jones said “There are no greater legends in the game than Diego Maradona. Arguably the most talented player in history, he lifted the World Cup in 1986 and anyone who watched him play will never forget him. Honouring him on the Fanz platform is our privilege.

The greatest art form of blockchain is not the NFTs themselves, but the smart contracts on which they are built. In this case, we will make sure that a percentage of every NFT sold is given to children’s charities in Maradona’s name”.

Stefano Ceci added that Maradona always put children and people in need first during his life, so this collaboration with Fanz is a great tribute to Diego.