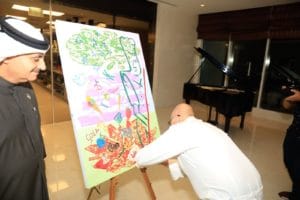 Dubai: here’s the first NFT for a chef with three Michelin stars

On the occasion of a dinner hosted by Heinz Beck (La Pergola, Waldorf Astoria Rome***), the first NFT linked to a “dine wine and art experience” was created.

The three-Michelin-starred chef created his first non-fungible token at his Social restaurant in Dubai.

The dinner was paired with a tasting of great Italian wines, all part of the Italian Wine Crypto Bank, which promoted the initiative together with Crypto Dine Wine Art, a company specializing in the creation of NFTs linked to the world of food and wine.

According to the press release, this is the first NFT in the series. Moreover, chef Heinz Beck is also the author of the painting, as he dreamed of becoming a painter as a child. It was his father who dissuaded him from becoming a painter and directed him towards cooking, but Beck never stopped cultivating his passion for art in private.

Beck‘s original painting gave rise to the NFT and has since been destroyed and, thanks to the blockchain, only 35 copies will live forever.

The dinner by the Michelin-starred chef, which took place on 17 February, included six courses and several fine Italian wines.

The wines paired with Heinz Beck’s NFT experience were selected from among the prestigious Italian wineries that are partners of the Italian Wine Crypto Bank.

For the occasion, the last winery was represented by CEO and winemaker Bernardino Sani, who introduced one of the evening’s wines (the “Solengo” Toscana IGT 2018) but also announced the launch of another NFT, this time linked to the Brunello Di Montalcino DOCG 2016 magnum.

The post Dubai: here’s the first NFT for a chef with three Michelin stars appeared first on cryptodailynews24.com.