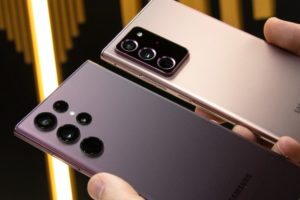 In South Korea, electronics giant Samsung wanted to include Non-Fungible Tokens at the launch of its new Galaxy S22 smartphone. Basically, consumers who have a pre-order of the Galaxy S22 will also receive a commemorative NFT developed on Theta Network.

Samsung and the NFTs, along with the Galaxy S22 and Tablet S8

Starting in its headquarters, South Korea, Samsung seems to want to involve Non-Fungible Tokens, giving them away to its customers who have already pre-ordered the new products: either the Galaxy S22 smartphone or the Tablet S8.

These are commemorative NFTs created in collaboration with Theta Labs (THETA). On that note, CEO and co-founder of Theta Labs, Mitch Liu, commented on Twitter:

We plan to provide ongoing membership benefits and privileges to Galaxy S22 and Tablet S8 customers who own a Samsung Theta commemorative NFT and look forward to building a long-term community among members.

“We plan to provide ongoing membership benefits and privileges to Galaxy S22 and Tablet S8 customers who own a Samsung Theta commemorative NFT and look forward to building a long-term community among members.”

Customers who have pre-ordered Samsung’s Galaxy S22 or Tablet S8 can claim their NFTs by registering on ThetaDrop and applying a unique code generated through their “Samsung Members” app.

Pre-orders have already opened on February 9, and the devices will officially launch on February 25.

Samsung is taking advantage of the NFT sector

Theta Labs is the team behind the blockchain project Theta Network and a crypto-native video streaming service called THETA.tv.

Its network is pushing into the sports and video streaming niche and incentivizes activity on its platforms through the native THETA token.

THETA ranks among the top 50 cryptos by market capitalization, priced at $3.67 at the time of writing. In the last 24 hours, the price seems to have experienced a 5% pump, perhaps due to the ongoing news.

Samsung is not the first time it has chosen Theta Labs. Back in 2019, a collaboration was announced with Samsung NEXT, the South Korean company’s venture arm, and precisely Theta Labs for a streaming platform on the blockchain.

The electronics giant and TVs with integrated NFT platform

Samsung isn’t even the first time it’s experimented with the world of NFTs. On the contrary, to usher in 2022, Samsung Electronics has reportedly also announced three new TV models with an integrated NFT platform that allows for the trading of digital artwork.

These are the MICRO LED, Neo QLED, and The Frame models that, according to Samsung, integrate an application to discover, buy and trade digital artworks.