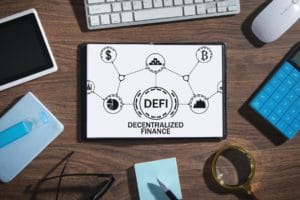 New rules from the SEC could threaten DeFi

New rules recently proposed by the SEC to oversee government securities trading systems could allow the agency to also oversee crypto exchanges and digital asset exchange platforms, such as those from DeFi.

This is stated by SEC Commissioner Hester Peirce, better known as “crypto mom,” and the agency’s only Republican commissioner.

The SEC’s rules a risk for DeFi

According to what Bloomberg revealed, Peirce says that while the new 654-page SEC plan only explicitly mentions cryptocurrencies once, it could pose a threat to token and cryptocurrency trading platforms.

“The proposal includes very expansive language, which, together with the chair’s apparent interest in regulating all things crypto, suggests that it could be used to regulate crypto platforms. The proposal could reach more types of trading mechanisms, including potentially DeFi protocols”.

Thus, this is a hypothesis put forward by the SEC commissioner most exposed to and supportive of cryptocurrencies and decentralized finance, while Chairman Gensler has since declined to comment on these claims.

The new SEC rules could also apply to crypto exchanges

What the SEC envisions

The new plan proposed by the SEC would actually have as its main objective to extend the current regulations also to platforms that trade Treasuries and other government bonds, but the risk is that they will be extended to crypto platforms as well.

In fact, although on the one hand, the basic idea would only be to bridge a regulatory gap related to exchange platforms that currently do not have the obligation to register as exchanges or brokers, on the other hand, the new proposed regulation would also force “communication protocol systems” to register. This ambiguous definition in fact could also be attributed to crypto exchanges and DeFi platforms.

Gensler himself has repeatedly stated that he believes that many digital assets, but excluding cryptocurrencies like Bitcoin, could be securities, and thus would fall under the SEC’s authority. He has also called for crypto exchanges to have to register with the SEC itself in order to operate in the US, so that it can somehow oversee their operations.

If approved by the SEC commissioners, the proposal for the new regulation will be publicly available for 30 days for comment, then once placed in the Federal Register, it would go into effect.

At this point, it will be necessary for the SEC to provide clarification regarding this issue, and it is likely that among the comments it will receive there will also be some that will refer precisely to crypto exchanges and DeFi platforms.

The post New rules from the SEC could threaten DeFi appeared first on cryptodailynews24.com.