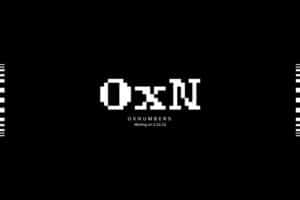 We all know by now what NFTs are and how the web3 is radically transforming the everyday life of many people: from artists to entrepreneurs, from traders to collectors. Today we are going to talk about the first NFT project with dynamic supply based on numbers, made in Italy! It is called 0xNumbers.

0xNumbers is the first NFT collection based exclusively on numbers.

The collection consists of numbers from 1 to 222, at minting this is the only feature that distinguishes the various pieces, a feature that will allow at a glance to analyse floor price and rarity. Of each number, there are as many copies as the number represented. So 24753 pieces, from the rarest #1 to the most common #222.

drop your wallet and you'll get 1⃣

Will there be a WhiteList?

There will be no WhiteList! Only Free Mint Pass.

Up to 10% of the supply will be distributed for FREE.

To get one simply:

On which blockchain will 0xNumbers be launched?

The blockchain on which the minting will take place is Polygon (layer 2 of Ethereum with fees close to 0).  However, it will be possible to “transport” the NFTs on the Ethereum network, through the bridge that will be present on the website.

What will be the price of a 0xNumber?

There will be several stages of minting. The first one will be reserved for those entitled to the “Free Mint” after which there will be 3 phases, the first of which will be a public mint at 0.01 ETH.

Dynamics – how does the game work?

Every owner of a 0xNumber can boost his number by decreasing it by one unit through a “boost” process. In order to “Boost” his own 0xNumber he must be willing to destroy (burn) another 0xNumber he owns and pay the Boosting Fee. From an input of two pieces, paying the fee will result in only one boosted 0xnumber (thus one unit closer to #1).

let's get back to school fam!

YOU CAN BOOST YOUR #NUMBER,
BUT WHAT DOES IT MEAN?

Here's a visual explanation of how the supply changes as a consequence of this process!

Boosting Fee: how much is it and where does it end?

The fee to be paid is variable: the closer you get to #1 the more it increases, and as the “burned” number is closer to the one you boost then it decreases.

The accumulated Boosting Fee will be redistributed to the owners of the 0xNumbers NFTs. Each owner of a number will therefore receive passive income simply by owning one or more 0xNumbers. The rarer the number, the higher the share of the boosting fee received as income.

Is there something else besides numbers?

We did want to introduce an artistic component.

At minting the 0xNumbers will all be the same, but the owners will be able to customise their background at every boost, giving them the possibility to show what they prefer!

To explain this dynamic we are already collaborating with many artists from the NFT scene who are creating the customised #111 series for us! All different and all unique, all representing the number 111!

Benefits – what is the purpose?

Participating in 0xnumbers means entering a new ecosystem. The first 50 numbers are 1275 in total (following the rule above) and thus 5% of the total supply, but each number can be made unique by its background. So those who play to climb to the top and those who play to be on the map, each will benefit.

*This article has been paid for. cryptodailynews24.com did not write the article or test the platform.