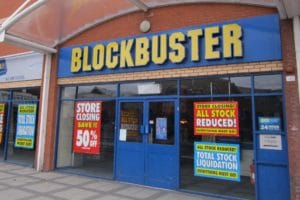 BlockbusterDAO wants to turn the historic Blockbuster movie brand into a decentralized streaming movie platform, dubbed DeFilm. On the crypto-lovers’ social, Twitter, the group describes its mission and its plan to achieve it.

In a roundup of tweets, the BlockbusterDAO account debuted its idea of wanting to buy and transform the historic movie brand, now benched by Netflix and other brands, into a decentralized streaming movie service.

The choice of the brand from this DAO was not made at random. Here’s how the Twitter account explains the motivations that led it in this direction:

The Blockbuster brand is not only nostalgic, but it’s a historic landmark in the history of film. Despite its 1/1 brand recognition, the company was destroyed by terrible leadership with an inability to pivot and make dynamic business decisions.

The brand still prevails in the minds of everyday consumers according to Brandwatch:

… (Since 2013,) sentiment has improved from a score of -20 to positive 14. In other words, people’s feelings for Blockbuster turned positive once its stores were gone.”

The new project has been dubbed “DeFilm” and revolutionizes the creative decision-making and financing of the film and television industry through DAO governance.

BlockcbusterDAO: raise $5 million to get started

Blockbuster is currently owned by Dish Network, a U.S. television provider that purchased the movie rental company in 2011. To get an idea of the brand price, BlockbusterDAO reported that it seems a “low-ball” offer of $1.8 million has been made for the brand, but that the price will be higher to beat any counteroffer.

That’s why, in anticipation of starting the new project, BlockbusterDAO thinks it’s necessary to provide for fundraising of at least $5 million through BlockbusterDAO’s NFT minting. To that end, here’s how it quotes the tweet:

“Okay but HOW do we buy Blockbuster?

FreeRossDAO and the winning of Ross Ulbricht’s NFT collection

In 2021, Decentralized Autonomous Organizations, or DAOs, continue to gain momentum. In addition to BlockbusterDAO’s current offering in the world of decentralized movies, there was also an NFT auction earlier this month to fund the FreeRossDAO group’s cause, dedicated to Ross Ulbricht, founder of Silk Road.

Basically, Ulbricht’s first NFT “Genesis Collection” ( currently in prison with the disproportionate prison sentence of two life sentences plus 40 years) raised over 2,800 ETH, about $12 million at the time.

These funds will be used primarily to free Ross, promote prison reform, and share Ross’ work with the world, giving everyone a chance to own it.

Ross Ulbricht allegedly introduced hundreds of thousands of people to cryptography, but his disproportionate punishment is linked to his management of the defunct Silk Road darknet marketplace.