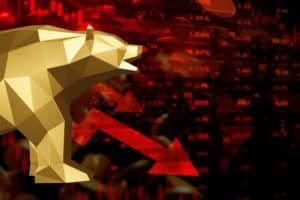 US: buzzword, slumps. Down real estate, stocks, and cryptocurrency

Powell’s words did not do the U.S. markets any good, and like a tsunami, all stock prices came down, including the cryptocurrency and real estate markets.

On August 27, the Jackson Hole Symposium was held in America, a kind of banquet where major economists, entrepreneurs, banks, and investors gather to review the situation and where usually every year the Federal Reserve, in the voice of its Chairman (now Jerome Powell), explains the vision according to which the U.S. Central Bank will move until the end of the year.

Thus, Powell spoke of an iron fist in the fight against inflation, which although it is slightly but progressively falling, is not doing so as expected and that is why the tiller must be kept straight. This will result in larger rate hikes, and that is why markets have had to digest the Fed chief’s uncompromising line.

Between now and the end of the year there will be three dates corresponding to rate hikes. Analysts predict, net of what they have already been raised so far, that the next ones will be 50 basis points for the first two and 25 for the third. Things, however, could also change.

The market from the beginning of the year to date has lost $10 trillion, monstrous figures that, however, cannot be entirely blamed on Powell, but if anything on the Fed and in part on the geopolitical situation, which is itself the cause of the rising costs of all commodities.

The fear has become real and we will most likely go for two 75 basis point hikes and then end the year with one 50 basis point hike. This has destabilized the markets and almost everything has collapsed: stocks, cryptocurrency, and the housing market.

The performance of the housing market, sales, mortgages, and rents

Speaking of the real estate market, it is worth delving into. Similarities with 2008 arise, and perhaps the collapse will take on absolute values even greater than that of the bubble at the time, but the situation, while critical, is not serious.

In July alone, the sale of newly built houses recorded a double-digit decline of 12.6% compared to June 2022.

Such significant and prolonged inflation could only do damage to the construction sector and home purchases as well. The erosion of purchasing power is being felt, and higher interest rates are leading to more expensive and therefore less affordable mortgages for people.

Rents are no longer cheap, far from it; in certain residential areas of major U.S. East Coast cities, they have even doubled. Construction companies are building less for all the above reasons. Suffice it to say that the total number of homes currently for sale today is about 1 million, a figure historically close to the lowest ever recorded to date.

The pandemic has introduced to the masses the importance and convenience of smart working. This new reality, coupled with the fact that house rents have risen, just as real estate production has declined, means that homes are enjoying increasing care and attention from those who fortunately already own them.

The mortgage situation, however, although the market situation is bad, is not similar to that of the outbreak of the Lehman crisis. The quality of loans disbursed is higher, the vast majority of mortgages are more solid because they are fixed-rate, and the rules for disbursement are more stringent.

The post US: buzzword, slumps. Down real estate, stocks, and cryptocurrency appeared first on cryptodailynews24.com.