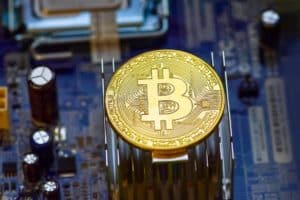 After Jerome Powell’s speech in Jackson Hole, experts say it may be time for Bitcoin to restart after hitting its low.

Is bitcoin at its low after Fed Chairman’s words?

The Fed‘s number one, Jerome Powell, who has for months initiated a very aggressive rate policy to challenge rate hikes, said in a speech on Aug. 26 that on rates he intends to pull straight “until the job is done” and that is until the institution is sure that inflation “will be under control,” even if that process “will cause some pain for households and businesses.”

Markets immediately fell back into the negative as the words were quite clear about the Federal Reserve’s intention to continue with its rate hike policy. It was a different story for Bitcoin, which, on the other hand, after falling 6% since Powell’s speech, may have found important support from which to restart, according to experts.

Traders, after the Fed Chairman’s words, are now betting on a 65% chance that the Federal Reserve will raise interest rates by 50 basis points in September, up from 32% just a day ago, according to the CME FedWatch Tool.

The drop suffered by the main cryptocurrency appears to be smaller than traders expected. It is roughly in line with the decline of the large Nasdaq 100 technology index over the period, while in the past Bitcoin’s losses have often been greater than those of the financial markets, to which it seems increasingly correlated over the past year, especially with the Nasdaq technology index.

Bitcoin’s descent may have ended

Expert analysis regarding the cryptocurrency market

“Bitcoin is showing some resistance here as it has broken back above the $20,000 level, despite broader stock market weakness. Cryptocurrency traders are not used to Bitcoin weathering a loss on Wall Street, so this could be a promising sign.”

For John Toro, head of Independent Reserve digital asset operations, cryptocurrencies continue to be viewed as “a high-risk beta asset.” But according to the analyst, the market will benefit greatly from the upcoming upgrade of the Ethereum network, which is likely to be a catalyst for new investment throughout the market.

It remains to be seen what the reaction may be of Bitcoin, which seems to have lost that characteristic of an anti-inflationary tool, which it has had for some years. Not coincidentally, when the last reading of U.S. data in July, which spoke of U.S. inflation slowing slightly, Bitcoin and Ethereum reacted positively.

The post Bitcoin may have hit its low after Powell’s speech appeared first on cryptodailynews24.com.