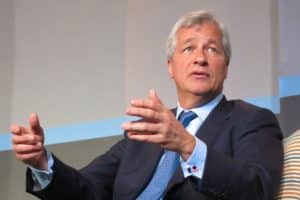 JPMorgan: something worse than a recession could be coming

According to JPMorgan CEO Jamie Dimon, even something worse than a recession could be coming.

JPMorgan CEO speaks out on the subject of recession

He revealed this last week during a lengthy interview with Yahoo Finance.

Dimon says that although the U.S. economy looks strong, there are, instead, storm clouds on the horizon.

The main problems are inflation, shortages of some commodities, the war in Ukraine, and the international geopolitical situation, particularly the relationship with China.

According to JPMorgan’s CEO, the odds of a “soft landing” as advocated by the Fed would actually be only 10%, with, instead, a hard landing but with mild recession at 20% or 30%. The same percentage (20% or 30%) for hard recession, but also for “something worse.”

Although it is not crystal clear what he means by “something worse,” what is relevant is that Dimon considers this extreme scenario significantly more likely than the soft landing.

In addition, he says that the numbers currently are distorted by the enormous fiscal and monetary stimulus bestowed since the pandemic began, such that, for example, there is a recession with declining unemployment, which is quite anomalous. He also added that he believes it is highly unlikely that the Fed’s forecast of bringing inflation back to 4% by the end of the year will come true.

This scenario generates low business confidence in the future, which only confirms the hypothesis of incoming storm clouds.

To be fair, however, Dimon in the past has not always shown himself to be good at forecasting.

For example, in 2017 he called Bitcoin a scam, fearing an almost total collapse. He was so wrong that four years later he even claimed that Bitcoin’s price could reach $420,000 by 2026 when the price was $42,000 as of September last year.

However, in this case, he did not make a single prediction but outlined four scenarios of which two were negative, one relatively neutral, and one positive. Overall, his expectations appear clearly negative, especially in the short term, but the fact that he does not exclude beforehand a positive solution in the medium term makes his latest statements more credible. In fact, he also explicitly stated that he believes it is a mistake at this time to make forecasts consisting of a single possibility.

“Whatever the future brings, JPMorgan is prepared.”

This last statement suggests that by “something worse” he does not mean a full-blown total collapse, or a big reset, but simply a crisis a little harder than a simple recession.

The post JPMorgan: something worse than a recession could be coming appeared first on cryptodailynews24.com.