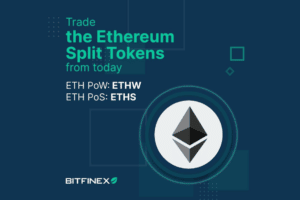 These are tokens that allow users to trade on Ethereum’s potential PoW fork that could result in the creation of new tokens.

In fact, with the mid-September Merge, Ethereum’s old PoW-based blockchain will eventually be de facto abandoned, while all transactions will be moved to the new PoS-based Beacon Chain.

The splitting of the chain will effectively create new tokens, for now generically called ETHPOW, while the new ETH tokens on the new Beacon Chain will simply take the place of the current ETH tokens on the old blockchain that will no longer be used.

It is not yet clear whether Ethereum’s PoW fork will be successful, so some are ready to bet, for or against it.

To that end, Bitfinex Derivatives will make the so-called Chain Split Token (CST) available to users, to allow speculation on the outcome of the fork.

The tokens can be purchased from the Bitfinex Token Manager

In the hypothetical event that there is no consensus change on Ethereum’s current PoW blockchain, ETHS tokens will expire worthlessly and ETH will be given in exchange for ETHW. This scenario to date seems very unlikely.

On the other hand, in the event that Ethereum’s consensus change goes through with the start of PoS use but without a PoW fork being created, ETHW will expire worthlessly and ETH will be given in exchange for ETHS.

If the PoW fork occurs, users will be credited with both ETHW and ETHS tokens, expiring on December 31, 2022.

Bitfinex, however, warns that this description is only cursory, while the complete and correct terms are described specifically in the terms of the CSTs. It also urges people to make sure they understand and accept the inevitable risks before possibly deciding to purchase ETHW or ETHS.

The new CST tokens will then be available in trading pairs on the derivatives platform.

“We are delighted to provide our users access to these new Ethereum Chain Split Tokens to help prepare for all eventualities as we approach the Ethereum Merge.”

“Not only are we trying to provide the best experience to our users, we also ask for their feedback while designing products like this.”