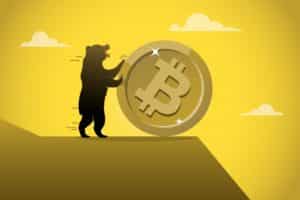 Recent research by Kaiko has revealed that bearish sentiment has returned to the cryptocurrency markets.

A wave of pessimism returns for cryptocurrency market sentiment

In particular, as of August 19, it seems that the relatively good momentum that began in late July has come to an end, so much so that several liquidations in the markets have brought some pessimism back.

The price of BTC and ETH fell, along with that of the equity markets, after the release of the Fed’s reports indicating a still decidedly restrictive monetary policy.

These difficult market conditions continue to put a strain on stablecoins, with problems for HUSD and aUSD.

The current price level of BTC and ETH is near monthly lows, and the less than comforting news regarding inflation only adds to the pessimism.

The problem affects Britain in particular, but it is also serious in EU countries and the U.S., which is the most important market for cryptocurrencies.

According to XTB’s Chief Market Analyst Walid Koudmani, the overall situation remains quite difficult for the economy, due to widespread cost increase from inflationary pressures and supply problems, so much so that there is concern that governments are failing to combat the factors behind these problems.

Koudmani points out that in August the price of Bitcoin nearly reached $25,000, thanks to a brief rebound from late July levels, giving hope that a broader recovery could be triggered after months of negative performance. Instead, the price subsequently fell again and was unable to maintain the gains made in the first part of the month.

U.S. data seemed to paint a slightly better picture of the overall economic situation, pointing to the possibility of a lower-than-expected next Fed rate hike. Instead, bond yields continued to rise, while Fed reports seemed to suggest the possibility of a continuation of the central bank’s restrictive monetary policy. This may cause volatility in the markets, as, moreover, already observed yesterday.

“One thing is certain, cryptocurrency investors are increasingly concerned about the sustainability of a recovery rally, and this most recent pullback could shake their confidence once again despite some encouraging signs seen earlier.”

It should, however, be added that just as bearish sentiment has returned quickly, in theory, some optimism could also return with the same speed, should the conditions be right. Currently, however, these conditions do not seem to be there.