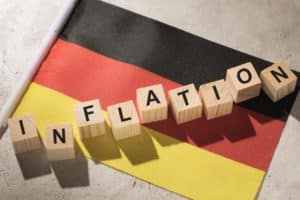 The German Central Bank is predicting a difficult autumn for Germany. According to a report, the country could reach 10 percent inflation by mid-December.

Inflation in Germany could reach 10%

In the August monthly bulletin where the Central Bank gives a health check on the Teutonic economy, a worrying fact emerges that shakes both the country’s economy and that of Europe having assumed the role of the locomotive leading the group of 27 for years.

Citizens’ savings are increasingly eroding as prices rise regardless of sector. Above all those in the energy sector, raw materials and basic necessities.

“The decline in economic production in the winter months has become much more likely, the high degree of uncertainty over gas supplies this winter and the sharp rise in prices could weigh heavily on households and companies.

A decline in economic growth has become more likely. Economic development is influenced by unprofitable developments on the gas market.”

In an interview with the influential German newspaper Spiegel, the newly appointed Central Bank President confirmed the above concerns by warning that Germany will necessarily have to take countermeasures.

Echoing and rounding out the economic picture is research from the IFO Institute that expands the view to the three-year period 2020-2022 by noting how German household savings have gone from more than 70 billion as of June 2021 to zero at the time of writing.

The swing highlighted in the research is impressive on both sides, both in terms of the savings accumulated in a year and a half and the time in which it was burned.

In Germany, inflation of 10% is expected by the end of the year

From 2020 to mid-2021, Germany, like the rest of the world, experienced the lockdown season, and the German middle-class overall managed to accumulate huge savings, which were also the result of state subsidies and work often done without being able to spend.

In the time from June 2021 to the present, in little more than a year citizens have burned through all the wealth they have accumulated, and this is mainly because of the huge inflation that is affecting the world and Europe more than America.

This Bundesbank report only increases concerns and will cause the state to tighten its belt.

Timo Wollmershauser, Head of Forecast at the IFO, told microphones:

“The extra savings that many households accumulated during the coronavirus pandemic have now vanished. At the same time, consumer prices will continue to rise sharply. This unfortunately means that private consumption will fail to pull the German economy for the rest of the year.”

To be fair, the IFO head goes on and explains how there has been a great propensity to save in recent years, but this unfortunately is no longer enough:

“If we take as a basis the average propensity to save in the five years preceding the outbreak of the coronavirus crisis, then as many as 70 billion euros more were parked in bank accounts than usual during this period.”

Savings were completely burned by inflation, and the trend shows no sign of stopping, confirmed by the data for the next quarter as well.

Wollmershauser concludes by explaining that:

“It is likely that high inflation was a key factor in this “saving” by households.”