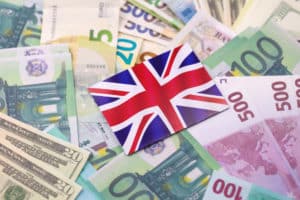 Annual inflation in the UK hit a new record in July.

It turned out to be even higher than 10%, which is a level that has not been seen for more than 40 years.

The surge began in October last year, when it rose above 4%. But it was during 2022 that it literally exploded, particularly in April when it rose above 9%. It has remained above this threshold ever since, growing further month by month to 10.1% in July.

We have never seen such high peaks since the European currency has existed, even though Britain has not adhered to the euro and has retained its British pound.

As far as the Eurozone is concerned, inflation in July was just shy of 9%, with the surge that began in March when it was well over 7%.

These figures seem to reveal rather clearly that a significant, though not complete, role was played by the war in Ukraine, and the consequent rise in prices of fossil hydrocarbons imported from Russia.

For although the upward parabola of inflation began long before the outbreak of the war, it had nevertheless remained below 6% in both Britain and the Eurozone until February. So the primary cause was not the outbreak of war in Ukraine – an event that occurred in late February – but most likely the ultra-expansive monetary policies of central banks themselves, including the BoE (Bank of England).

However, just between February and March, inflation literally exploded in countries such as Britain and those in the Eurozone, where it had never been above 6% in the past 30 years.

It is enough to mention that since February 2020, which was the time of the outbreak of the pandemic, the BoE‘s balance sheet went from 60 billion to 80 billion British pounds in three months, and then exceeded 100 billion at the beginning of the last quarter of 2021, and went up to 110 billion at the end of the year. Since then, during 2022 it has fallen to the current 108 billion, or slightly less than double the pre-pandemic level.

This caused inflation to rise significantly to 5.5% in January 2022, while then the outbreak of war in Ukraine did the rest.

Moreover, according to analysts’ forecasts, inflation was believed to have risen to 9.8% in July, and instead, for the first time in the past 40 years, it even exceeded 10%.

The London Stock Exchange did not react well to the news, but so far has lost only 0.5% compared to yesterday. It is possible that somehow the current bad situation had already been discounted in the past few months, as the BoE itself makes no secret of the fact that it expects further rises in inflation to perhaps as high as 13% in October 2022.

In fact, during the course of the year, it raised interest rates six consecutive times, the largest single increase since 1995.