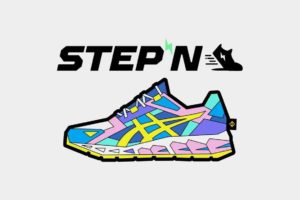 After months of negotiations and rumors, at last the news that so many have been waiting for has arrived, namely that of the agreement between Asics, a Japanese sportswear company, and StepN, a company specializing in fitness gamification on blockchain.

Partnership between StepN and Asics confirmed

Asics launched a limited-edition NFT sneaker collection in recent weeks with the StepN running app on the Binance NFT Marketplace, which is participating as a partner in the initiative.

The new collection has reportedly been more successful than anticipated on the eve of the launch. The StepN x Asics NFT Sneaker Mystery Box collection, received participation from more than 195,000 participants. Total trading volume exceeded US$10 million with the minimum price maintained at over US$3,000.

StepN is a fitness app on the web.3, which is enjoying great success. Its concept is to bring people to exercise and lead a healthy lifestyle while having fun through gaming, thanks to blockchain technology and NFTs. In fact, users who download the app have the opportunity to receive cryptocurrency rewards by performing targeted exercises and workouts.

To participate, users must download the StepN app, purchase an NFT and move to earn tokens. Users can spend their earnings in the StepN ecosystem or trade them to an external account and cash them in for profit as well.

Since launching its public beta in December 2021, STEPN has gained tremendous popularity in a very short time and has surpassed a market capitalization of $1 billion. User growth and engagement have also steadily increased, with total app downloads exceeding 1 million.

Asics, founded more than 70 years ago by Kihachiro Onitsuka has become one of the largest companies specializing mainly in sports shoes and apparel, contending for the market with the two giants Nike and Adidas.

Joe Pace, head of business development at Asics, about the partnership signed with StepN said:

“Asics is committed to inspiring people to have a sound mind in a sound body and we aspire to apply technology in thoughtful ways to advance that mission. Our partnership with Stepn and their world-class team is designed to encourage the Web3 community to step away from their screens and get walking, jogging, and running outdoors”.

As for StepN, Jerry Huang, co-founder of the company stated:

“Within the span of a few months, StepN is proud to have attracted a huge, enthusiastic following in the Web3 space. Our partnership with Asics couldn’t have come at a better time. Asics is one of the top-performance footwear brands in the market globally, and we’re excited to share the benefits of Web3 to a new, diverse pool of fitness enthusiasts”.

StepN, Binance and Asics also announced that they will donate US$100,000 from proceeds from the sale of NFT Sneakers to a joint charitable cause.