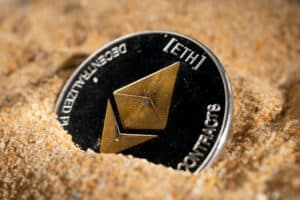 Merge: Great opportunity for Coinbase according to JP Morgan

Two days ago, Kennet Worthington, an analyst at JP Morgan, said in a letter to clients that some institutional and retail investors such as Coinbase are likely to benefit from Ethereum‘s transition from Proof-of-Work to Proof-of-Stake.

The merger will be very beneficial for Coinbase as it can gain value from staking ETH that powers the transition.

According to the bank’s analyst forecast, Coinbase could collect more than $650 million in annual staking revenue after the Merge, assuming ETH remains around $2,000 and with an average yield of 5%.

JUST IN: JPMorgan says the #Ethereum merge to proof-of-stake will lead Coinbase to a bigger revenue opportunity.

On the other hand, Coinbase has had one of the worst performances among exchanges since the beginning of the year. During the large market declines from April to June, it recorded $1.1 billion in net losses in the last financial quarter, mainly due to the large drop in volumes recorded in daily trading. Exchange trading volume fell 29% in the last quarter.

Retail transaction revenues for the exchnage founded by Brian Adams, stood at $616.2 million, down 66% and below analysts’ estimates of $667.1 million.

But Ethereum’s transition to ETH 2.0, which is expected to take place in mid-September, could give the company’s accounts a nice boost, the investment bank said.

“We see Coinbase as a meaningful beneficiary of the Ethereum Merge. Coinbase is bigger in Ethereum than was intuitive to us, thus leading directly to a bigger revenue opportunity”,

According to JP Morgan, Coinbase would hold a sizable stake in Ethereum, which would amount to about 15% of total assets, and this would help give it a competitive advantage once Ethereum moves to Proof of Stake, thanks to the Merge upgrade. Coinbase also began offering staking for institutional clients this month, and its CEO, Brian Armstrong, said he expects this will benefit its business model.

But weighing on all this like a boulder is the possibility that new regulations from regulators could restrict the very activity of staking, as even Armstrong himself admitted in a tweet two days ago.

It's a hypothetical we hopefully won't actually face. But if we did we'd go with B i think. Got to focus on the bigger picture. There may be some better option (C) or a legal challenge as well that could help reach a better outcome.

Armstrong bluntly explained that Coinbase, in the event of regulatory interventions along these lines, would be ready to shut down staking activity on Ethereum. The staking service, as explained by the company in a blog on the company website, was launched in early August, only for institutional clients, he said.

”We’ll continue to add more assets for staking for both our retail and institutional clients going forward”,

These fears are well-founded in the wake of the US Treasury’s Foreign Assets Control (OFAC) decision in early August to effectively ban Ethereum-based cryptocurrency (ETH) mixing service Tornado Cash, accused of laundering $7 billion.

The post Merge: Great opportunity for Coinbase according to JP Morgan appeared first on cryptodailynews24.com.