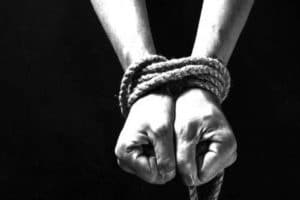 Beaten and kidnapped in exchange for Bitcoin, it happened in India

A man in India beaten and kidnapped for a Bitcoin ransom. It happened a few weeks ago in India, as reported in local news, when police arrested three men, Sandeep Pratap Singh, Vijay Pratap Singh, and Rajveer Singh, on charges of kidnapping. Police reportedly recovered 30k rupees in cash, a gun, and five cell phones.

The three men allegedly followed a businessman, then kidnapped, beat and tortured him to get 8 Bitcoin from him as ransom. The police said that the three knew that the businessman traded in cryptocurrency and committed the crime with the intent of receiving precisely a Bitcoin ransom from him.

According to local police sources, on 7 August the trio kidnapped Arjun Bhargav near Kalindi Park in Vrindavan Yojana on the pretext that they wanted to strike a deal with him. They held him hostage in a house where they beat him, pointed a gun at him and stole 8 Bitcoin from him.

“On the way, they tied his hands and legs and took him to a house in Barabanki where they tortured him for three hours”,

Police also reported the testimony of the victim’s wife, Nidhi Bhargava, who said the kidnappers held him at gunpoint and forced him to reveal his password and then transferred all the Bitcoin to their account.

“They also forced my husband to transfer the money into their bank account and opened fire when he resisted it. Luckily, he was not hurt. They then brought him back to Lucknow and dumped him on the roadside”,

the woman told the police.

As mentioned, this is perhaps the first case of kidnapping to receive cryptocurrency payment in return. But the link between crime and cryptocurrency still remains very high. Usually, computer systems are hacked, as happened for example last year with the Lazio region website, by people who demand a ransom in cryptocurrencies to unlock it. The frequency of these types of crimes was reported to have doubled in 2021, according to the “Verizon Data Breach Investigations Report”.

According to the report, the value of such crimes committed using cryptocurrency would have reached $14 billion in 2021. Also according to Verizon’s report, only in 10% of ransomware cases (the theft of computer data for ransom) there would was e a ransom payment, averaging about $11,000.

The post Beaten and kidnapped in exchange for Bitcoin, it happened in India appeared first on cryptodailynews24.com.