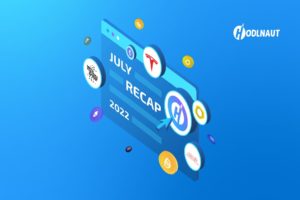 Hodlnaut, a Singapore-based cryptocurrency lending company, in recent days notified the Asian city-state’s financial authority (MAS) that it has discontinued the possibility of withdrawals for its customers, citing adverse market volatility conditions.

This replicates what happened a month and a half ago to one of its competitors Celsius, which after discontinuing the ability to withdraw funds, was then forced to file for Chapter 11, the antechamber to bankruptcy for US companies. The Singaporean company appears to be retracing the same path, admitting in other words that it is at risk of insolvency, just like Celsius, or like Voyager Digital soon after, which filed for bankruptcy after Three Arrows Capital was unable to repay interest of $25 million on a loan of more than $350 million.

Hodlnaut said in a statement.

“We have since informed the MAS (Monetary Authority of Singapore) of our intention to withdraw our licence application. Hodlnaut is therefore no longer providing regulated digital payment token (DPT) services, i.e., our token swap feature. For the avoidance of doubt, Hodlnaut will also cease all borrowing and lending services”.

After the announcement, the company disconnected its Reddit, Facebook and Twitter pages giving rise to speculation about its possible impending bankruptcy. The company said it is consulting with Damodara Ong LLC and working on an execution and restoration plan for the best interest of its users. It is expected to provide an update on its recovery plan on 19 August.

This news follows just hours after the bankruptcy of German cryptocurrency exchange Nuri, which declared insolvency five days ago, as announced by the Reuters news agency. Nonetheless, Nuri announced that its customers’ funds were safe.

“All funds in your Nuri accounts are safe due to our partnership with Solarisbank AG. The temporary insolvency proceedings do not affect your deposits, cryptocurrency funds and Nuri Pot investments which have been done with us”,

the company said in a note.

Returning to Hodlnaut on the company’s LinkedIn profile, the only one still active, there would still be 500 million ETH of funds available for customers, whose funds therefore would be safe, according to the company. What is certain is that the risk of contagion on some less financially sound companies could generate in many investors a loss of confidence that could translate into new heavy declines.