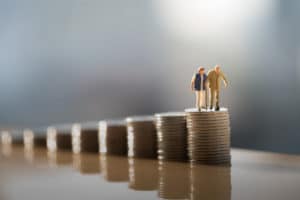 Despite the bear market, pension funds are bullish on crypto

From 2020 to the present, complicit with the pandemic that brought the world economy to a standstill, geopolitical tensions in Ukraine, and the advent of a bear market that has historically correlated with BTC and the crypto world in general over the past 3 years, pension funds that were exposed in these markets have also taken a hit.

Pension funds at a loss

Investments made by pension funds have run into substantial losses due to the market downturn, and this is especially in North America where there is evidence of a greater appetite for exposure to this asset.

Fund managers concerned with the future of American workers have been at a crossroads that has forced them to do some serious thinking.

Poor conditions and large market losses this year forced pension fund managers to consider whether to double down on investments in cryptocurrencies or turn their gaze to other assets, and the response was as abnormal as it was thoughtful.

The funds chose to gain exposure and double their efforts in crypto for two reasons primarily, in the first place due to the fact that, when the market recovers strength, this asset will tend to perform much better than the stock market, and secondly due to the time frame that after nearly a year of bear market may be at the turning point.

The report in the New Yorker newspaper gives some examples of this all-in of pension funds in cryptocurrencies.

Last fall the pension fund of the Houston Fire Department in Texas invested $25 million in crypto, to be more specific in Bitcoin and Ether, and despite losses that amounted to half the face value, it did not give up.

The Texas Fund’s $5 billion investment chief Ajit Singh decided to double down and explained to the WSJ how despite volatility and the market currently not playing in their favor in the long run this choice will pay off.

In a world that is so interconnected but also so diverse, not all analysts agree with the overexposure to digital currencies, evidence of this is the $300 billion fund for teachers in California that has vetoed investments in cryptocurrencies because of the massive risk, at least in this period and with this legislation.

The post Despite the bear market, pension funds are bullish on crypto appeared first on cryptodailynews24.com.