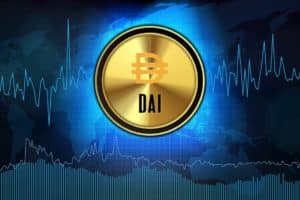 DAI could lose its peg to the dollar

MakerDAO has decided to eliminate DAI’s exposure to USDC and this could cause it to lose its peg with the dollar.

A few days ago the US Treasury Department decided to blacklist Tornado Cash, the crypto mixer service. It also placed criminal penalties on anyone interacting with Ethereum addresses that were deemed to be involved in illegal activities by the OFAC.

Following this news, Circle, the issuing organization of the USDC stablecoin, decided to freeze all USD Coin funds belonging to the banned wallets.

The situation is getting more serious than previously thought and MakerDAO is considering selling all USDC held as collateral in the protocol.

Rune Christensen, co-founder of MakerDAO, intervenes with a comment that almost suggests the decision is necessary:

“Will be discussing it at tonight’s call but I think we should seriously consider preparing to depeg from USD … it is almost inevitable that it will happen and it is only realistic to do with huge amounts of preparation”.

The main problem goes back to the fact that, currently, 60% of DAI in circulation are collateralized by USDC.

If one were to simply sell them in the market, it would be necessary to burn proportionally all the DAI that are collateralized by that particular asset. Clearly, this is the most unlikely choice, given that these are funds held in users’ wallets.

Moreover, DAI would instantly lose its peg to the dollar, as more than half of the units in circulation would become uncollateralized.

In this case, the mechanism fueled by the Price Stability Module (PSM), which guarantees the peg with the dollar through the issuance of overcollateralized loans, would be missing.

At the time of writing, the overall collateralization ratio for the entire protocol is 144.64%, a sign of positive health.

According to Makerburn data, stablecoin-backed DAI are 81.9% of the circulating supply. This ratio has grown in conjunction with the crypto market crash, which has seen the share of crypto collateral replaced in favor of that consisting of stablecoin.

A possible solution for the USDC to be demobilized, but still catastrophic

One might consider exchanging all the units with their corresponding countervalue into ETH. However, this would generate serious instability for DAI, making it too exposed to one volatile asset.

It will still have to be seen whether the debt ceiling imposed by the PSM for that collateral is met. In fact, precisely to ensure adequate diversification within the ecosystem, the community chooses a threshold. This level indicates the maximum number of DAI that can be issued for each type of collateral.

In case of extreme need, new Vaults can be created that reference the same asset, as is already the case, but with different parameters.

As already mentioned, over-reliance on one crypto would generate a serious problem related to the stability of the protocol.

The cryptocurrency market is by definition very volatile, and if the price of ETH were to fall as a result of the transaction, then almost all DAI in circulation would become highly under-collateralized.

This, as already happened to UST following the collapse of LUNA, would eventually cause Maker’s stablecoin to lose its 1:1 peg to the dollar.

If this happens, it could create a chain reaction within Ethereum’s DeFi ecosystem. The reason lies in the fact that, by now, DAI is too interconnected with the other protocols and a collapse of it could result in an event of a systematic nature.

Not surprisingly, Ethereum co-founder Vitalik Buterin also appears to be very concerned, so much so that he points out the potential criticality of this choice:

“It is a risky and terrible idea. A significant decline in the spot price of ETH could see the collateral backing for DAI becoming undervalued”.

He is joined by Robert Leshner, founder of Compound Finance, who speaks on the implications this decision could have on the entire DeFi industry:

“Converting DAI into a price-elastic asset will ruin it, full stop”.

The post DAI could lose its peg to the dollar appeared first on cryptodailynews24.com.