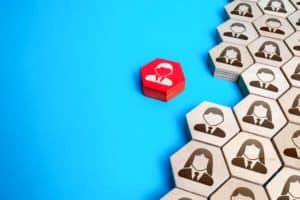 Robinhood lays off 23% of staff

Robinhood had announced at the beginning of the year a layoff of 9% of staff, which will now be followed by an additional 23% in defections.

The cryptocurrency trading platform, among others, has a complicated relationship with its employees, who must not have taken well a yet another email announcing staff layoffs.

With an email signed directly by Vlad Tenev, CEO of the company, employees were faced with the announcement of yet another tranche of layoffs.

At the beginning of the year, the company had informed its staff in the same manner that 9% of the workforce would be laid off because the company, aided by the macroeconomic situation, was forced to shrink its costs.

The news seemed in line with what other companies had announced and/or done. For example, Elon Musk had also announced staff cuts of 10%, so while it was bad news, it did not have much prominence.

It is of these days the news of yet another slap in the face to the employees: with an email Tenev dismisses its employees by enclosing a letter in which he explains that the dismissal has sitting validity, but that the cut employees will receive their emoluments until October, including economic benefits and the related accrued severance pay.

The meager consolation is that the company will help the redundant staff through its HR to find another job in the industry so that they can maintain employment.

In the letter, Tenev returns to the causes, again citing the macroeconomic situation and the fact that the drastic drop in trade has forced the company into a new and more stringent cost rationalization.

As part of the plan to file off exits, the company will build a mega corporate headquarters and thin out the chain of command so that it will be faster and more functional, as well as significantly cut costs.

A hefty fine for Robinhood

But do the costs really stem only from a passing drop in trading and macro difficulties?

It seems that Robinhood is telling a half-truth, at least from reports leaked by the NYDFS, which is the authority that oversees privacy and transparency in digital currency transactions.

According to the authority, in fact, Robinhood has been fined $30 million due to violations related to anti-money laundering and cybersecurity regulations.

The cash exit is just the first in a long series. If we stick to the numbers, from 2020 to the present, there has not been a year without which the exchange platform has suffered fines from the regulator.

In 2020, for the same problems, the company had paid as much as $70 million and the following year, in 2021, another $65 million for similar problems.

Everyone can make mistakes, but repeating the mistake three years in a row could provide an important alibi for the newly unemployed.

The crypto industry is relatively young, and running into some of these issues is something to be reckoned with, even as ongoing improvements by company insiders increasingly avert the danger of glitches and make transactions increasingly secure.

The post Robinhood lays off 23% of staff appeared first on cryptodailynews24.com.