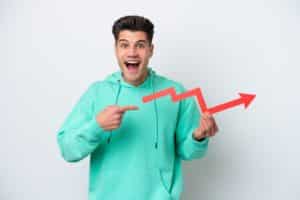 How much would we have if we had invested 1,000 dollars ten years ago

A thousand ways to lose everything and just as many ways to gain, what would investing 1,000 dollars 10 years ago have gotten us?

Placing a bet today and holding the investment for ten years is not for everyone, but there are times when the outcome might be surprising.

From an analytical point of view, by analyzing the fundamentals of a security rather than an asset or currency it may make sense to hold an amount allocated in a particular investment.

So-called safe haven assets such as precious metals, gold, the dollar (which tends to be in the long run) or an ETF are the most popular for investment of this kind that uses time data as a very weighted variable.

In a tweet, Watcher Guru listed a series of investments with their results reporting how much it would return to invest $1,000 in a particular security rather than asset, and the result is nothing short of sensational.

The special top ten is dominated by big tech with one exception and not a small one, Bitcoin.

The only clothing brand Nike just outside the top ten would have returned $4,925, a very respectable result.

The podium is occupied by Netflix which would have generated $27,700, Tesla with an excellent $162,000 and BTC itself at the top of the special ranking.

Digital gold wins by a landslide with a result of +353.5% which is $3,535,000, it is really the case to say that the saying “Bitcoin is the factory of millionaires” has never been more true.

Another very interesting figure to look at is how much 10-year bonds would have returned, which in 2012 were yielding 6%, an important figure for the instrument itself but not at all comparable to what is highlighted above, let alone digital currencies.

This reflection helps us understand that magic does not exist, but reading the fundamentals well and focusing on a solid project can give a huge turnaround to one’s portfolio with a relatively (it is always subjective) low investment.

The post How much would we have if we had invested 1,000 dollars ten years ago appeared first on cryptodailynews24.com.